I used Shevchenko in the Weekend League and ended up in Elite 3 with 1 game left. He was Amazing at Shooting and passing. used Engine on him and played 4222 with Son in a 2 striker force. His pace was not a problem, he seemed actually really fast. He ended up getting himself 26 golas and 20 assists. His finishing with both feet is clinical. However shooting with his left from about 15m was very bad. Although he's only got 73 passing he ended up beeing one of the best chance creators ever for me. What I really loved about this card was his fighting for the ball, when a defender outmuscled him, he fought back and 1/3 times he won the ball back ( also against players like Van Dijk). Biggest issue is his stamina. You want a player like him to run everywhere in the attack, make runs behind the defence and fight back, but when you do that, he's already tired in the 60. minute. With Engine his dribbling was mediocore. He's a finisher, not a dribbler. For that price he is better than most of the strikers out there. If you like the player because of nostalgic reasons get him, he won't disappoint you, but if you want amazing results for your money there is a better way to spend 500k for me just because of his very bad stamina.

fights back for the ball 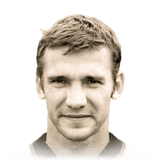 The return of the Tsar

If you're looking for a True Striker, a Pure # 9, a real scoring machine, this is your icon ! This legend is the total package. Very complete, : extremeley powerful, fast (with hunter), strong, has silky first touch and above all, he's a clinical finisher.
Read full review

I got him as my first Icon ever and used him in a epl squad. played him with hunter. He feels like he is two-footed - scored great goals with his left foot. Also he is a good finisher - excellent first touch finish. But when the scripting takes over he missed all his chances, including a post shot vs an open goal. Also he is slow - his pace felt like henderson, nowhere near 84. Also his passing was average and his dribbling...
Read full review
0
/600
Update my avatar Dos and don'ts
Top Rated
New
Controversial
Show comments