Well, after grinding so hard and feeling like I lost about 6 years of my life due to a combination of stress and what I can only describe as an 'almost heart attack', I finally had enough swap cards to redeem Prime Essien! OH BOY!!!!!

After playing 30 FUT Champs games with this card, I'm left EXTREMELY pleased with my Icon Swaps choice. I normally finish between Gold 1 and Elite 3 and am a Div 2 Rivals player.

First off, this guy is 100% a duplicate Kante (And I don't mean that in an Andre Mariner confusing The Ox and Kieran Gibbs cos they're both black sort of way). He's like Kante with sonic shoes! Ironically I have them both in midfield and yeah, they're an unstoppable pair!

What I love about Essien is he's just everywhere in midfield. He's strong, aggressive and quick.

He does tend to press very high sometimes, and there has been the odd occasion where my striker has turned around to find Essien standing right next to him, begging my winger to cross in the ball so he can smash a volley.

His high/high work rates aren't bad though. He's got a good shot on him and he's already scored a good number of goals for me.

His passing is good, but like...I DID have Prime Keane in his place, and I do notice a difference between him and Keane when it comes to long passing. Like, the amount of times Keane would slide the PERFECT ball through a crowded midfield to Messi who was making a good run down the wing.

Essien is also capable of this, but just not as graceful. He does tend to fluff a couple, but nothing where I've thought I needed Keane back in.

He does have 22 assist for me, so that at least show's he's finding the right player in the right place more often than not.

All in all I'm really happy. That was a big grind and I think he's definitely been worth the doctors appointment I'll be making this week to make sure I haven't punctured a lung screaming at my first owner non rare bundes squad for losing their 6th in a row.

Can shoot and score

Stamina - Played a few games that went to extra time and despite him being high/high, I never once found him to be totally out of it.

Tends to push high a lot 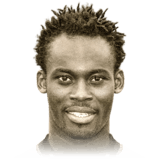 This is the best card (midfielder) i have ever used , he is amazing. if you have the tokens for icons swap i would highly recommend. this card is about 10x better than Kante. He wins everything. i use him in a two cdm formation with Prime Roy Keane. He bully's people off the ball , he's super quick and he has insane passing. there are no cons with this card , and he can also rip a long shot.
Read full review

This guy has it all. I've used 86 and 88 Vieira, 85 Blanc, 91 Zidane, but Essien offers such a well rounded game compared to any of these.
Read full review

As soon as Icon Swaps II was released I knew Essien was the card for me, and finally (many many squad battles and rivals games later) he is sat with Roy Keane (from Icon Swaps I) in the CDM position. I've only played 7 games with Michael but I can already tell that with the Engine Chemistry Style that he's staying in the team until Fifa 21 releases. In his 7 games he has scored 4 goals and nabbed 1 assist in CDM. Now you ma...
Read full review
0
/600
Update my avatar House rules
Top Rated
New
Controversial
Show comments