So I had been using this card for 2 months, I did nearly 300 games and he had been great for me!

Pace 7/10 : Yes, Puyol is not the fastest center-back but with the meta of 11 defenders in your camp, He will be great!

Shooting 3/10 : Who cares about that but I put 3/10 because he surprised me in fut champions : he sometimes  make a call in the profundity and he scored like 10 goals like this for me. But if you are in 1v1 situation, don’t use the power and just use finesse

Dribbling 7/10 : obviously he is not a tomori or a ramos because he has not a great stat in agility and balance ( 55 and 56) but we don’t feel that in the game because he is small

Defending 10/10 : obviously the best part of that puyol : when he is on the ball, he takes the ball all the times

Physical 9/10 : He is great here. With his 88 in stamina, he can defend 120 minutes in fut champions! His strength and his aggression are very useful because he doesn’t let the opponent alone. Obviously, he will not take all the heads because he is small but he is great also in this with his 89 jumping and his 98 heading accuracy.

So I liked his defending and his physical

His pace is not as a tomori but with a shadow style, he is a little fast 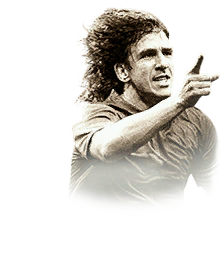 OMFG, THIS MAN IS A F*#KING BEAST. I endured the horrendous icon swap challenges and completed them safely, only to trade them in for this long-haired sexy handsome beast. I play him in a 4-2-2-2 in this squad https://www.futbin.com/20/squad/15557808 next to Juan Jesus's E...
Read full review

Good but not great

Like most people that use this card, I got him on icon swaps. I've played a lot with him and I can say that he is reliable almost all times, but the problem is that he just doesn't seem to have the stats that he has on Defending. Also where that tf is the leader trait.Pace:I used him with shadow since his pace is very low for the state that the game currently is. Not bad, but don't expect catching mbappe o...
Read full review

Regret picking him from Icon Swaps

I needed a center back and was thinking about picking either Puyol or Maldini. Puyol was less tokens and I needed a new center back as soon as possible, I regret this decision more than everything. He is way too small for a centerback and feels incredibly slow. His long jesus hairs make him even more annoying. He can't jump, he can't run, he can't pass the ball, its actually unbelievable. I discarded him in the last weekend...
Read full review
0
/600
Update my avatar Dos and don'ts
Top Rated
New
Controversial
Show comments