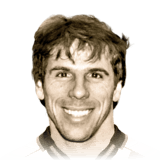 With too much of game play changes from Fifa 19 to 20, and the definition of META Players changing day by day, there was one card that many forgot was Zola Prime. The moment Prime icons were released I couldn't resist but checkout on Zola. I kept on watching his price and when it got within my budget I immediately Bought him. I 1st tried Zola with Hawk Chem style to boost his physical too and later went to apply Hunter to b...
Read full review

For starters, I got Zola from my prime icon pack in swaps. When I saw that I got him I was not overly excited but realized that there are much worse players I could have gotten. I put him in my team and played him both at CAM and ST in a 4-2-3-1 and he was better at ST for me. He is not a bad player at all but I don't know why he is so inconsistent at finishing. Sometimes I would be in a very tough situation and would just ...
Read full review

so i got this guy in my prime icon pack and since i needed a new striker i was really happy. but after a few games with him i wasnt so happy. his pace with a hunter looks good on the card but not in game, he feels not slow but definitly not super fast. his finishing (with a hunter) was alright not great, but his positioning was extremely good he was always making runs and he was never marked by a defender, and his dribbling...
Read full review
0
/600
Update my avatar Dos and don'ts
Top Rated
New
Controversial
Show comments