I got him from my prime icon pack and didn`t know what to expect, little did i know that i had just got my hands on a BEAST. He has amazing pace, shooting, passing, dribbling, and physical! For me in mostly Division Rivals games he has scored 493 goals and assisted a further 289 in 533 games. I play him at right striker in i 41212 wide with normal 93 Ronaldo at left striker, they are amazing together, would definitely use them together as a strike partnership, he can also play alone or as a Cam with an engine. He also has amazing free kicks. The only weakness i could point out is the 3* weak foot, even though it feels very 4*ish in the box due to his high shot power. I cannot really say if he is worth the money because i got him free but i would buy him for his price of 190k. 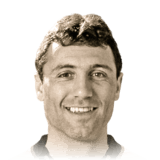 After using him for 141 matches, I finally had to review him! He is by far the pack card I have ever opened from a pack in FIFA. I received him untradable so I had no choice but to use him as I could not sell him therefore I cannot really comment on the "value for money" section as I didn't spend any money on him. I am glad that I couldn't because now I have what to me is the one of the best strikers I have ever used in FIF...
Read full review

Such a beastly presence

I had the privilege to play with is mid icon and was never happier with any other player. Unfortunately, after wanting to try other players I needed to switch formations where he could not fit. Long story short, I got over my new team and formed a new one with this Stoichkov in it. Let me tell you, his prime feels so much better than his mid and that one was already godly for me. A very noticeable upgrade is his physicality...
Read full review

I packed Quincy Promes TOTSSF that I sell to buy this Hristo Stoichkov Prime.I saw his stats and I wait a lot of this card, and he did not disappoint me and played his best football in FUT Champions and for some challenges in Rivals.
Read full review
0
/600
Update my avatar Dos and don'ts
Top Rated
New
Controversial
Show comments