I stumbled upon this card after packing him in marquees last week. After hitting a frustrating bout in the Weekend League, I swapped out my ST / CAM combo, from Gabriel Jesus + Zaha to Ben Yedder and Mollet. Yedder is the FIFA cult favorite and I was expecting some great things from him. Mollet was a complete unknown into my team and I tossed a deadeye on him because of the fantastic boosts to major CAM stats. 99 shot power, 96 vision, 95 short passing, 89 long shots, 87 finishing... Yes please.

In game, Mollet plays like a cheap version of the FIFA meta favorites like Reus, Gomez, Mertens, He's great at finding pockets of space during forward play and, from there, spraying passes to your wingers and full backs. Micro dribbling with him is very very easy, and that high balance means you can turn larger defenders around in circles without losing the ball. The long shots are no joke either and you won't have to rely on finesse to hit the target, and the finishing (with deadeye) is good enough at the CAM slot. He's my de facto corner and free kick taker too, checking off another essential for most teams that are lacking a free kick monster. His passing and long shots alone make him a worthwhile addition and he was intrinsic to an easy Gold 3 finish with 5 games remaining.

Truth be told, it would be nice to have some of the great traits in this card and sadly he doesn't have any. But at a discard price point, this card is an incredible steal, especially in the first 3 months of the game. A solid card to build around and upgrade later. 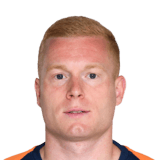