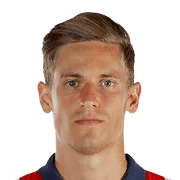 0
Red
Upcoming Matches
P. Chemistry
Squad chemistry
ST
78
RW
80
LW
80
CF
81
RF
81
LF
81
CAM
81
CM
82
RM
81
LM
81
CDM
82
CB
79
LB
80
LWB
81
RB
80
RWB
81
Reset
Basic
Sniper
Finisher
Deadeye
Marksman
Hawk
Artist
Architect
Powerhouse
Maestro
Engine
Sentinel
Guardian
Gladiator
Backbone
Anchor
Hunter
Catalyst
Shadow
Comments
Reviews
0
/600
Update my avatar Dos and don'ts
Top Rated
New
Controversial
Show comments
Top Reviews
Only logged in users can submit a review
A review must be written in English
At least 200 characters are required.
Compare this player to other similar players you have used(optional).
If you import your club to FUTBIN or send us an image with the player data(fill the form below) your review will be marked as verified.
Include what you liked about the player in the pros area and what you disliked about the player in the cons area.
Your review will be manually checked during the next 24 hours.
Chem Style Used
Formations
Position
Rate Player Base Stats (1-10)
Pace
5
Shooting
5
Passing
5
Dribbling
5
Defending
5
Physicality
5
Most Used In:
Submit Review

This card is OP. He is so agile like Kante last year but a little less. He is better at tackling than last years kante inform but the defensive controls this years feels weird and sloppy. He is very aggresive and strong which is crucial for a midfielder. His passing is very good. His speed is amazing and is perfect with a shadow on. he can also shoot so the opponent has so keep an eye on him if he is suddenly to run up the pitch and sneak into the box and score. He is better than Sissoko last year and is also pretty cheap. You can easily pair him up with carrasco and Yuri Berchice for full chem. his height also makes you midfield more diverse allowing you to defend against any problems if you pair him up with a smaller midfielder. This year i have also noticed that lean bodytyped defenders are very good at tackling as if the just wrap their foot around the player and taps to the ball. I personally used him with an anchor but also tried him with shadow. I just want him to be more defense oriented instead of pace and defending orriented

Ok what the heck are these stats. Its is so fricking overpowered. He probably took adama traores leg. When you get on to FIFA, buy him now before his price goes up. He looks so overpowered and his special cards..... His flahback will be like 93 rated and have 97 pace. Oh god the new ben yedder, but a midfielder.

Wow just wow this guy is absolutely insane. He wins so many balls back when you play him as a CDM or CM. For his current price (under 20k), he is one of the best CMs I've ever used under 100k. At one point I tried both him and Valverde and he consistently outplayed Valverde on my squad. He passes, he wins balls, and he scores when needed. Truly the perfect pure CM in this meta with lots of versatility. I believe he is the best bang for your buck player in the game right now as he plays like a 100k CM yet he is so cheap. I'd go as far as saying every La Liga squad should try this player and see for themselves why he is so good. I personally recommend shadow but really you could use any chem style on this guy.