This is the most fun card I've used this Fifa. I like trying non-meta midfielders - Pirlo, Gatusso, Xavi etc...Xavi is extremely fun to use and will elevate your passing game and make you enjoy the game that little bit more despite all the gameplay issues and frustrations with abundance of meta teams I came across in division 2, 3 and Weekend league. If your team has fast runners and other intelligent off the ball movers, Xavi will link up and set up chances non stop. My Mane just keeps scoring coz of him, the through balls (lobbed, normal, dashed) are all insanely good). Xavi even did the little scoop pass animation a couple of times which was sexy. He can also last the full 90 mins most games and makes key interceptios with shadow chem.

You'll need to balance your midfield though and you will need fast wingers/strikers/fullbacks (which most people do) to get best out of Xavi in competitive games. I tried Xavi with Pirlo and De Bruyne in a YOLO attempt and initially went from div 2 to div 1 but then plumetted back to div 3 which prompted me to swap gatusso in for pirlo.

Was hard to choose between pirlo and xavi, but xavi is just that little bit better at dribbling, defending and off the ball movement.

His base card is also great but this mid card really shines and I definitely noticed the better passing and overall composure being just that little better. I've used the 88 base card for 25 games, and upgraded to the 90 mid card for 17 games so far (All division 2 and weekend league games). If you want to have a break from using the same handful of midfielders and like passing (whether simple 5 yard passes or 40 yard through balls), this guy is a must try. 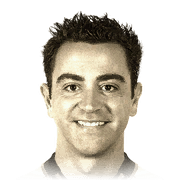 If you're a runner and like to use meta always and everywhere, don't read this review!Magician! I don't know how EA did it, but they were able to make this card even a little bit like Xavi. I really enjoyed playing for him. He is very responsive in contro...
Read full review
0
/600
Update my avatar Dos and don'ts
Top Rated
New
Controversial
Show comments