I´ve used him as a link for Upamecano Inform, and I have to say that he was very bad. I had to put him off after 10 matches because he did not handle it to safe any shots. His passing is horrible. I always need a keeper who can give some accurate passes, so If you also do so, avoid him!!!!! I played Lloris after it on less chem, but he was wayyyys better than him. 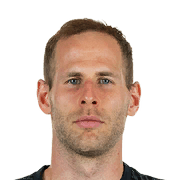 So I have just saw the review on Gulasci and was very suprised that the user had left a bad review. I bought him at the start of fifa at first for fodder. Then I packed Upamecano and Klostermann and decided to pair them up. This guy is an absolute beast! He is very agile and comes out for loose balls and he fails to let goals in. The amounts of times I've kept clean sheets with him is crazy. If you have a bundesliga team, p...
Read full review

I have tried the following GKs in this gameDe gea, ederson if nif, cech baby, courtois,ter stegen,neuer, Alison, Lloris and a few lower ones. But this card has been phenomenal for me, I obviously used him for the link to upamencano then objective mukiele, I won’t lie he has an odd bad moment but in 135 games I can’t say I’ve raged at him like every other gk, seems to pull of worldie saves....
Read full review

Picture this, its the start of FIFA 21, you see Klostermann with his insane pace, you get super hyped and excited. You then start building your team, and find yourself looking for a keeper with a strong link to your fast friend. Lo and behold, Gulácsi appears. On paper he looks super good, so you get even more hyped. Fast forward to you playing your first games with the freshly ...
Read full review
0
/600
Update my avatar Dos and don'ts
Top Rated
New
Controversial
Show comments