after spending 30+ hours on sniping I finally got this cracked card. I am a good trader and a pretty average Fifa player. As there are just foolish reviews about R9 moments I have to write my honest opinion about him. He‘s my left striker in a two striker formation besides CR7 TOTY and he‘s just another level! I‘m in Div. 1 and Gold 1 in FUT Champz.

He is lightning fast and paces out every fullback in the center defense.

His dribbling is on another Level. This Agility and Balance Upgrade makes him just unfair. 5* skills makes it even better. I played R9 94 and had Problems with his dribbling sometimes. With this massive Agility/Balance Upgrade he just feels better than Neymar.

His physicality is just phenomenal. He is enormously strong. Although he can easily push off every defender (Mbabu, Varane,...)

I think R9 is the best striker in Fifa 21. I played CR7 TOTY, Mbappe TOTY, Eusebio Prime, but Ronaldo Nazario is another level! Even if he is the best Player in the game i think it‘s totally crazy to buy a Player for 15.000.000. It’s sad that most of the Fifa Players don’t have the Chance to Play hin. I personally love playing with him and won`t ever sell him ever again... 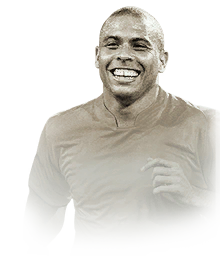 After somehow managing to pack this man from the Chelsea SBC I legit started to yell. However, my emotions would soon flip as I realized he wasn't the one. The problem is that he turns like a truck, manages to turn slower than lukaku. I gave him an engine, nothing. I also felt his shooting was terrible and he was getting outpaced by Laporte. His passing was also dreadful and his weakfoot is worse than Robben's. If you manag...
Read full review

packed this guy last weekend and decided to replace my gold Rashford, but I'm not sure he really lives up to the hype. His shooting was inconsistent, he was slow and chunky, and was really hard to link into my prem team. used in a strike partnership with Werner, got outscored pretty badly. usually finish silver 3 in fut champs but this week I only managed bronze 2. really not up to scratch for division 9 rivals either. hone...
Read full review

i have pay him 1500$ with moms credit card and put him rwb in 532 ( beaucause my favorite youtuber play also 532) he play in defence next to my varane endy walker pope and eusebio ( pay also with mom credt card ) but i still prefer mendy beaucause he can't stop atacking event with saty back and don't have autoblock like varane rttf my favorite player so when i have the ball wit...
Read full review
0
/600
Update my avatar Dos and don'ts
Top Rated
New
Controversial
Show comments