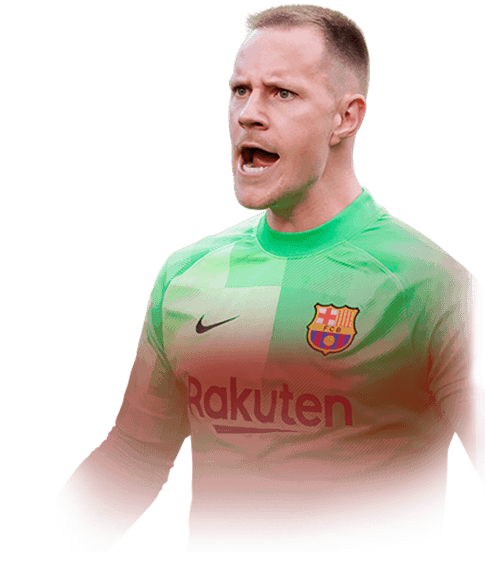 5.0
He Saves Everything
37 users liked this review

I honestly don't know what to say but this card is amazing. I have used normal Ter Stegen for a couple of weeks now in both weekend league and in rivals and he was great for me. This card however, is on a completely different level. He has saved me numerous times already and its only the first day that this card has been out. His reflexes are even more insane than his gold card, he comes for every cross and through ball and 1on1 he is a beast. I have seen save animations that I did not even know existed. I know he's currently 100k but to me that is worth it considering his gold card is close to 60k now.

Maybe his aggressiveness coming for crosses, but even then he normally gets at least a hand on the ball

This card is ridiculous. Honestly, I haven't used many others goalkeepers in this game, but this guy stands out for sure, I just had to write about it. He isn't god so the other team will certainly have chances to score, but he is good at handling great shots and every so often makes fricking MIRACLES. If I didn't have him, I would probably lose a third of the games that I play, but that's just speculation. So if you have any sense of the wonders this great life has to offer, you will take a chance on Ter Stegen.

I really don't know what to say about this card. I saw it would fit my team perfectly as having Rulebreakers Rudiger and Klostermann so I thought id give him a try. A few games went by and he seemed like a bad goalkeeper then I played one more and got man of the match saving 22/22 shots with some crazy saves then went back to poor. This isn't the cards fault in any manner. I just hope that EA soon sort out the gameplay because realistically is the best keeper in the game if he is having one of them games. I really do recommend trying him out if he fits because he can be an insane keeper.

CAN MAKE SOME OUT OF THIS WORLD SAVES

CAN LET IN EASY SAVES

NOT AGRESSIVE ON CORNERS