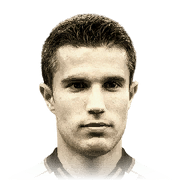 When they announced the new Icon additions to FIFA 22 I always had my eye on this review for the future.  Robin van Persie immediately evokes memories of “that” diving header against Spain and the reputation of a generational striker.  The Flying Dutchman scored goals wherever he went in his career and I was hoping that the same could be said for my squad this weekend.  While I played the majority of this weekend with RVP alongside Salah as the strikers in my 4-2-2-2 formation… I should note that I utilized van Persie as the lone striker for a few matches in the 4-2-3-1 and didn’t quite enjoy the output I witnessed during the experiment.  For me, RVP is better suited in a tandem striker formation that allows him to utilize some of his teammates' movement to create the space in order to create chances.  I should also note that I spent 5 painful matches with an ENGINE chemistry style applied to this card but quickly ended that test and returned to the HUNTER style to finish off my final Weekend League games.  Robin van Persie was the fox in the box all weekend long in the following squad: 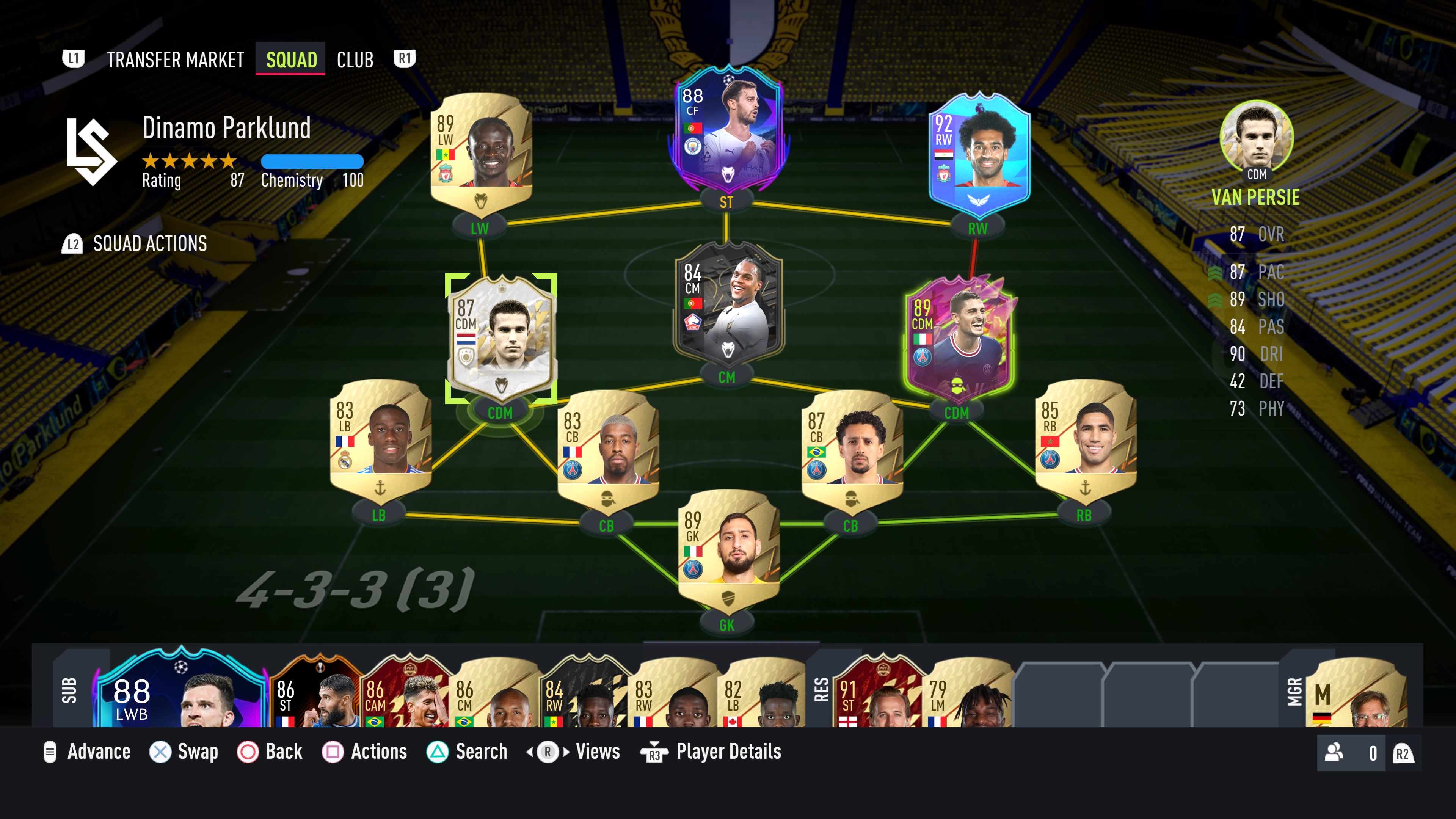 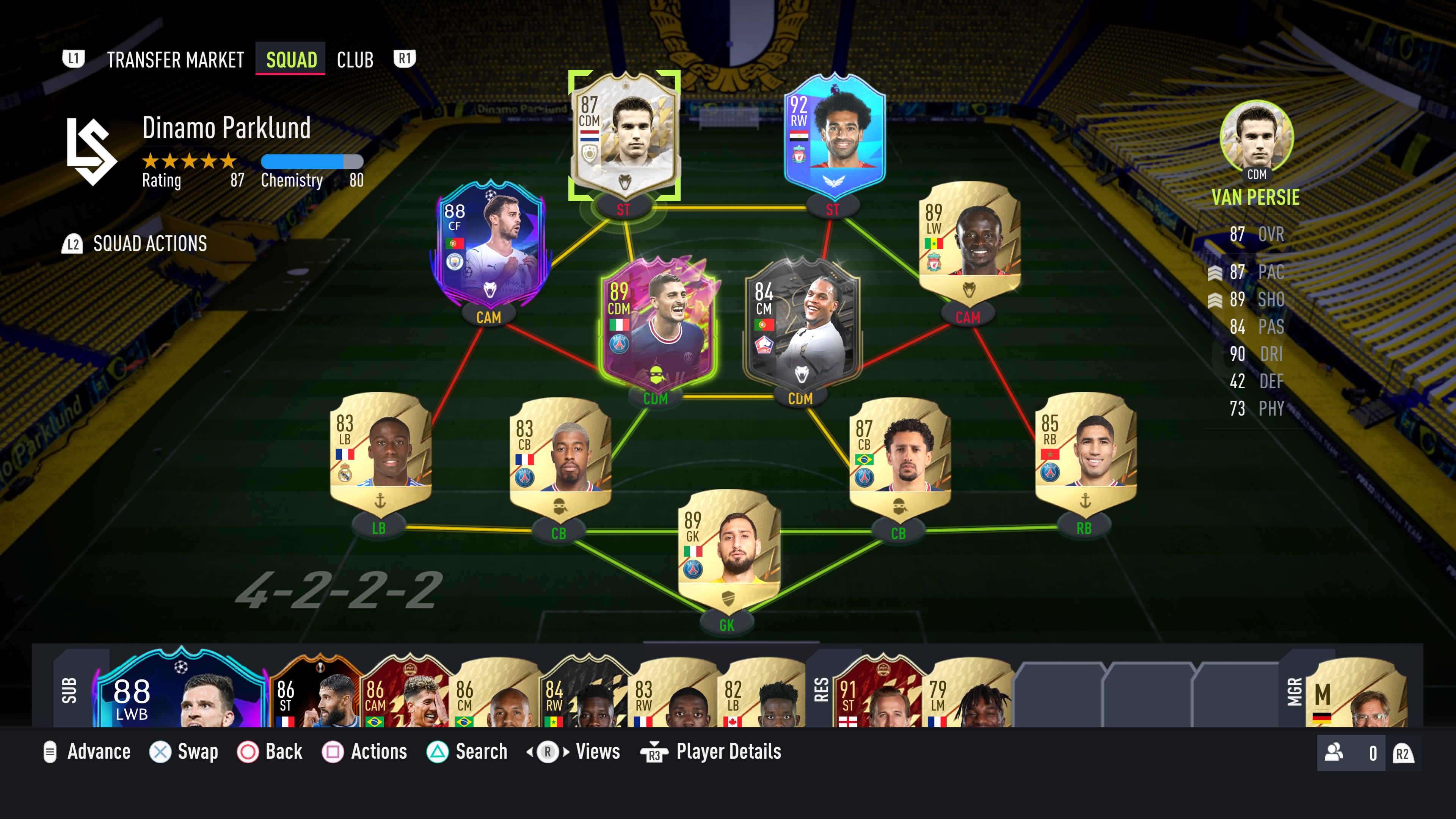 From the outset of FIFA 22, it has been clear that goals are at a premium throughout the Weekend League grind.  Yes, quitting and gifted wins will always play a factor in total returns… but in general, a goal per game performance has been the sign of a quality review.  RVP finished off the weekend review with 18 goals and 5 assists in 15 matches marking one of the better returns we have witnessed.  There is no doubt that RVP can find the back of goal when presented with the chances… but it was the other factors that continued to weigh this review down as it progressed.

It would have been criminal had this card not been a clinical finisher and thankfully no charges needed to be laid at the end of this review.  The 98 FINISHING & SHOT POWER combo was lethal in the extreme and thankfully transferred from foot to foot.  The 4 STAR WEAK FOOT performed exactly as advertised, but I should mention it was almost a carbon copy of the Salah review as RVP preferred to use his Outside Foot trait on the left... over taking attempts on his less favorite right.

I went with the height here as it is the main attribute in both a good and bad way.  I am certainly cutting into some of the good vs bad content but it is something that needs attention.  The 87 AGILITY & 71 BALANCE with this card is generous in the extreme.  This card is clunky and feels extremely slow when shifting momentum from left to right.  “So use the ENGINE chemistry style dummy!”  Yes, I can predict the comments… the issue was just how much the -5 ACCELERATION and SPRINT SPEED affected RVP even more and the frustration it caused was not worth the minimally improved movement. However, the one saving grace has to be the fact that the 76 STRENGTH also felt incorrect… but in a good way this time. RVP is a tank to get off of the ball and while the twists and turns feel sluggish, defender’s tackles are not nearly as effective as they would be on smaller options.

It pains me to say that there is simply no way for me to justify this price tag in the end.  The returns were respectable, but the total performance was well short of a 760k option.  When you consider the number of cards that are in this price range it is always going to be a stretch to place value on a card that has so many deficiencies.

True, the peace of mind that you get in knowing that RVP will take the majority of chances that fall his way has to be worth something in the end.  This card is clinical in the extreme and produced some absolute belters along the way.  Even more surprising was how effective this card was in the air… something I had read was not present with this card.  However, in my experience, the 69 JUMPING was outweighed by height and 91 POSITIONING and resulted in a nice collection of headed goals.  Unfortunately, it just felt as though every one of these nice surprises was met with equally frustrating revelations… the key one being the 85 SHORT PASSING that never fully performed to that level.  The 5 assists despite playing alongside a very potent Salah providing proof of these struggles.

Certainly an up and down weekend in terms of results and reviews.  Signature Series Sanches has lit the world and his price tag on fire this week and proved that once again the FUT King is back on his throne.  While the legend of RVP was certainly not bottled in this pixelated version of the Dutch Sniper.  One of the key factors I take into account before recommending these cards is asking the question if I would keep them in the squad if I could.  With Robin van Persie I seriously couldn’t have sold fast enough … which ultimately feels a massive let down given my excitement to test him out in the first place.  I am interested if you have experienced the Flying Dutchman… what was your take away?  Is he still in squads or have you moved on as well?  And if it hasn’t been clear already… it is a pass from me.  Hoping you are well.  Cheers for reading. 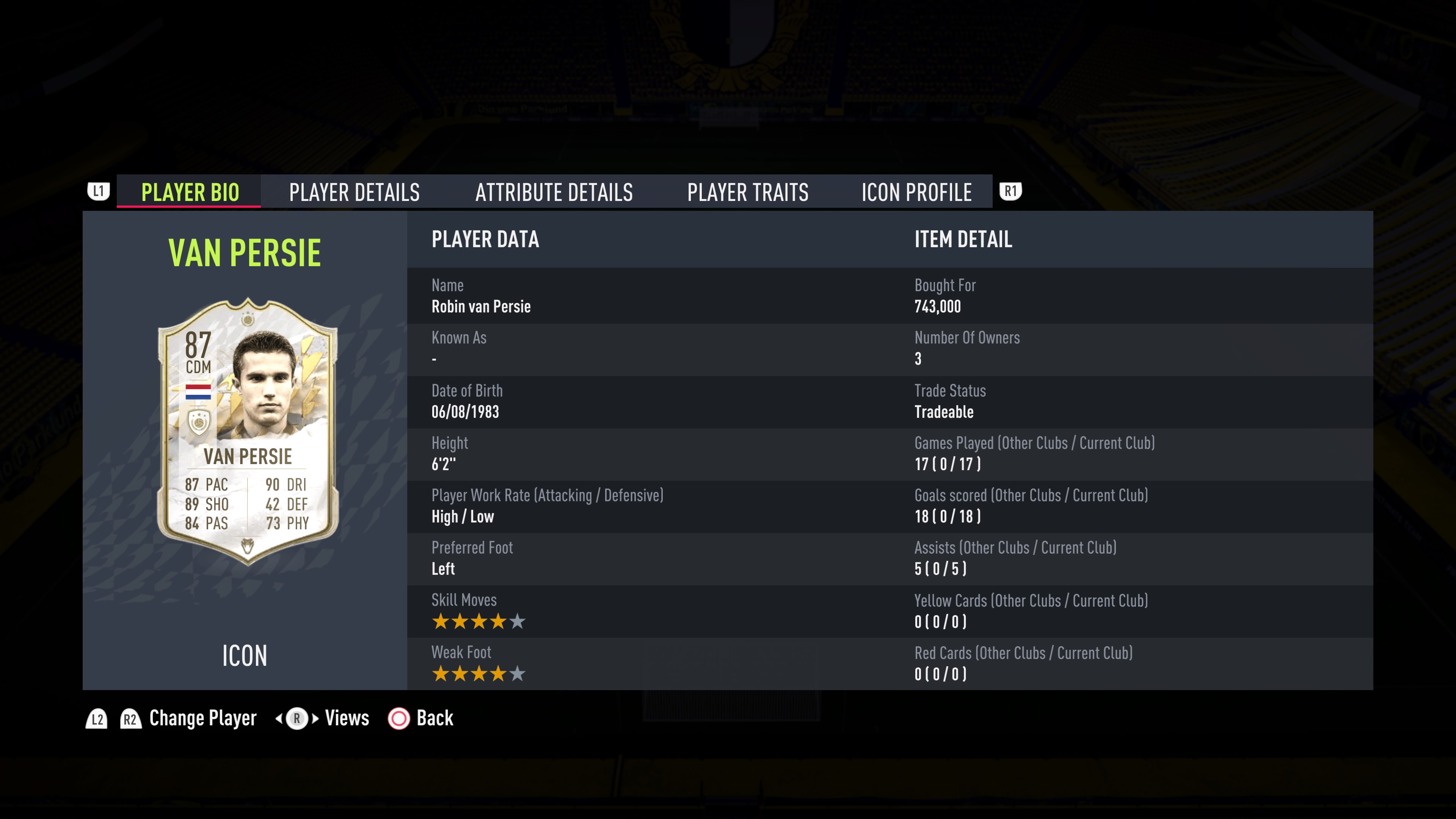 I was lucky enough to pack some good players in my 10 hours of EA Play, so I gathered some coins to the try the Base version of RVP. I had high expectations and felt some nostalgia from the gold cards of RVP back in Fifa 14 and 15. First of all RVP is pretty expensive so you have to be aware of that. Other than that this guy is an absolute goal scoring machine. He bangs them left right and center, his runs were excellent for me given the High/Low workrates. His Weakfoot is also pretty good but I prefer getting it on his left foot. His 87 Pace felt really quick and he wasnt sluggish at all. All in all RVP is a top class Icon striker but im not sure if he is worth the current price tag. Also this version was from his early years so his Heading is not that great.

Passing (for a striker)

So I bought RVP for nostalgia as he is one of my favorite players ever because of the fact that I am dutch and a Man United fan. So I bought him not expecting anything from the card but honestly he was so surprisingly good I had to write my first review on here. I played Division 2 Rivals with this guy with a cheap meta team around him and he is actually carrying me to Division 1. I put an engine on the guy and he was surprisingly fast, his shooting is honestly insane and his dribbling in the close areas (left-stick) was pretty good as well actually. Just a little downside is that he still feels (a little) stiff on the ball when you are actually going for a run but you should avoid that and let your wingers take care of that. With that comes that he feels so strong on the ball though, like so much stronger than his stat suggests. He also scored a couple headers for me so in the air he does the job perfectly. But the main thing is definitely his shooting. Inside the box, outside the box, finesse, power shot, outside foot. THIS GUY DOES NOT MISS. Honestly can not remember him shooting off-target once. 1.1 Million coins is a hell of a lot though but I won't be selling him.

I purchased this bloke as a bit of nostalgia to the time he hit that sweet volley off of Rooney's through ball with the intention to replicate it. Despite not having Rooney in the squad, Pedro and Dembele still provide lovely through balls and he just finishes each and every one of them. I went 12-5 in Weekend League with him and are in division 2 rivals. His finishing is out of this world, with the hunter boosting his volleys to 99 it feels like a volley will go in from wherever he shoots. Another great thing about him is his size : dribbling ratio, being 6'2 I didn't expect amazing dribbling but it surprised me, he has great dribbling for what I expected. Overall, he is very fun to use and banging volleys outside the box is the most fun thing I've done on FIFA. If you have the coins, get this man.