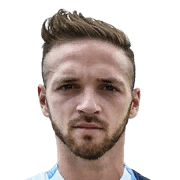 1
Sub out
Upcoming Matches
P. Chemistry
Squad chemistry
ST
69
RW
79
LW
79
CF
76
RF
76
LF
76
CAM
78
CM
77
RM
81
LM
81
CDM
75
CB
68
LB
77
LWB
79
RB
77
RWB
79
Reset
Basic
Sniper
Finisher
Deadeye
Marksman
Hawk
Artist
Architect
Powerhouse
Maestro
Engine
Sentinel
Guardian
Gladiator
Backbone
Anchor
Hunter
Catalyst
Shadow
Comments
Reviews
0
/600
Click here to verify your account in order to comment Update my avatar Dos and don'ts
Top Rated
New
Controversial
Show comments
Top Reviews
Only logged in users can submit a review
A review must be written in English
At least 200 characters are required.
Compare this player to other similar players you have used(optional).
If you import your club to FUTBIN or send us an image with the player data(fill the form below) your review will be marked as verified.
Include what you liked about the player in the pros area and what you disliked about the player in the cons area.
Your review will be manually checked during the next 24 hours.
Chem Style Used
Formations
Position
Rate Player Base Stats (1-10)
Pace
5
Shooting
5
Passing
5
Dribbling
5
Defending
5
Physicality
5
Most Used In:
Submit Review

4.5
The Best Serie A RB
4 users liked this review

All Games played in Divison 1 and Weekend League. Using Lazzari as a right back in a 442 with stay back while attacking instruction, when being played as pure defender an anchor chemistry style is a no-brainer for Lazzari.

This review is simply meant to get across one point and that's that Lazzari is the best right back in Serie A. I have used Cuadrado, Dumfries and Di Lorenzo and while all of these perform fine, I find they have very apparent flaws. Lazzari however does not seem to have any obvious weaknesses in his game. Cuadrado runs out of stamina late game; Dumfries is very slow and Di Lorenzo lacks the technical aspect.

With an anchor he essentially has 99 pace meaning that he has excellent recovery pace, something you would expect to be shown every game as he would need to make up for his bad defensive positioning due to his low defending stats. This is not the case as he is irregularly out of position despite his stats indicating otherwise. His combination of pace and decent interceptions also results in Lazzari breaking up play excellently very often by cutting off passes. He can then advance the ball forward with his outstanding technical stats for a right back, his passing is fantastic for a full back and his dribbling is on par with that of a winger. Where his dribbling and passing would be very average as a winger, it is elite for a defender. His jumping and small height jump out as obvious weaknesses however Lazzari leaps like a salmon and he is seldom beat in the air.

Lazzari is susceptible to being out muscled by a stronger winger like Rashford and if your opponent realizes early in the game they can force the attack down Lazzari's side. While he is great at off the ball defending, his on the ball jostling is lacking. Apart from that the only other flaw in his game is his shooting, while he will very rarely get the chance to score, his finishing does not reflect the 69 on his card. I have used Jordi Alba who has 73 finishing and it is miles better than Lazzari's.

In conclusion Lazzari is class right back who can do a job both as a defensive and an offensive full back, his nice spread of stats facilitate him into any team and tactic. His link to Felipe Anderson, who is also a class card, means he will find his way into my teams for a while. I would recommend leaving a basic on him if you're planning on having him attack in any capacity as it rounds him game out.