before I start I want to tell you that this is my first review ever so please excuse if I miss some important information. I packed him 3 Weeks ago in my rivals rewards and I was very happy because its the first Icon I have ever packed. Since then I played 147 matches in WL and Rivals (Elite and Div 1 (mostly Div 1)) with him. I use shadow and play him next to Varane, Kimpembe or Marquinhos.

The problem with Puyol ist not his pace in first place, its the combination of his pace and hight. Why? Because many people abuse long through balls and if my opponent has a tall and fast striker

(like Ronaldo or FB Benzema) he can easily win the ball and then use his pace to "escape" from Puyol. I never had problems with shorter players because Puyol pushed them away.

His passes were decent. Nothing special.

I never had a problem with his dribbling because if Puyol touches you, you will lose the ball and also get injured :D. Just kiding. His dribbling was ok but if you play on bad connection he then turns like a truck and will have many problems with high dribbling players like Vini Jr. or Messi.

Carles is a monster. Like a said before. If he touches you, you will lose the ball. He safed me so many times in the 90th minute were other players couldn get the ball of your opponents feet.

Same with deffending. He is an animal and pushes everyone away.

All in all if you play FIFA for fun, if you are from spain or a Fan of Barcelona I would recomend him because he is fun to use. If you want to play on a high level like Weekend League or Elite Rivals you will lose many games because of his pace. (mainly because of the trough balls) 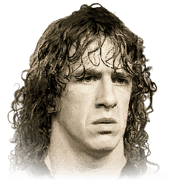 Good but not great

Yo, I packed him untradeable from 7.5 K PACK LIGUE 1 SBC.And he is good but he has some cons.Pace with shadow is good, but sometimes not fast enough.Shooting is meh, anyway he scored 1 long range goal for me.Passing is ok for a cbDefending is sick, 50/50 tackles, great interceptions.Physicality is good but expected better.Good but not worth the price, if...
Read full review

When Puyol got his SBC I did it right away, one of my favourite players of all time. And I do not regret it! He is a beast in defense. Yes he lacks pace against Mbappe but who doesnt? If you start falling with him he will most likely intercept the ball or get his body in between the ball and the player to stop them anyway. And he always stops the opponent. You know how sometimes you tackle and the opponent still comes out w...
Read full review

I First did the loan version of puyol because i wanted to try him out, and i can tell you that after two games i completed the sbc. I saw people complaning about the pace but i havent noticed it at all, for me he was fast, strong and once he was locked on the attacker it was over. I also think that i didn't notice the pace cause i was using him next to three of the fastest defender in the game, so by playing him next to fas...
Read full review
0
/600
Click here to verify your account in order to comment Update my avatar Dos and don'ts
Top Rated
New
Controversial
Show comments