Going to settle the debate once for all so that in future FIFAs people know what they are getting.

I have had baby R9 in my squad since the beginning of november and only today have I replaced him after 650 games played for my team. Firstly, the haters saying this card is overpriced are very wrong, you get one of the rarest icons in the game, who has 94 pace, and is brazilian - its as simple as that. Secondly the haters saying he is bad are very wrong, if he doesnt fit your playing style then thats your problem, but if you can use this mans abilities you will score bags of goals - like myself. I honestly wouldnt have made it to the likes of elite div or done well in WL without this guy, obviously now better players are coming out hence why I have replaced him.. temporarily (he will get back into my team for sure) but for the first half of fifa i have had so much fun with him and in every fifa i play i will hope i pack this card.

so to silence the haters, you are wrong, buy this card and use it properly and you will get results. He has out strengthed Koulibaly, run rings round FB varane and done numbers on every keeper he faces, hes quick and agile with and engine, his finishing is up to standard and will score almost everything - we all know every player will rarely miss sitters that just how this game is, the card isnt bad. He can pass too, not crazy long passes but a neat through ball and the second striker is through (242 assists for me). Also stamina is not a problem, have gone to ET many times and this man has led the team to a W. So to end, just get this card and ping balls over the top and score goals, its not hard. Also if you have the money get his mid, can imagine it will do some damage as well. Stop hating on this guy. 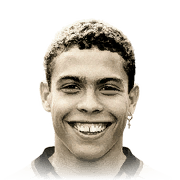 WOW I was luck enough to be able to try this BEAST on my mates account and he changed my complete thought on this game regarding finishing. R9 showed to me how vital attack position, finishing and shot power matter in this game. He made scoring goals effortless and combine this with his pace and dribbling this man cannot be stopped.
Read full review

I packed this guy untradeable a few months back, and I gotta say, he changed my team drastically for the whole of FIFA so far. Within his first 5 games in Div. 4 rivals, he scored 11 goals. I pair him with flash Benzema up top and they score all of my goals for me. He single-handedly qualifies me for champs every week. His flair is amazing. In his first game, he scored a scorpion kick in the 16th minute. He can run onto the...
Read full review

Packed him from the icon player pick and was quite unhappy since i've heard alot of bad things about the card but i won't lie he is accually really really good.Used him in the LAM in a 4231 becaus he has finesse shot trait and i was using potm Ronaldo at ST. I do recommend this player tho.
Read full review
0
/600
Update my avatar Dos and don'ts
Top Rated
New
Controversial
Show comments