During TOTY I decided to do his SBC since I had a lot of fodder. I also played him as a RM in 4-4-2 so it may not be the same experience if you would play him as a RW/RF. He played pretty good in FUT Champs and Squad Battles. When I decided to use him first I noticed his 81 balance was a little too low to make good turns so I gave him a engine to boost his balance to 91.

With engine chemistry style boosting his balance his dribbling can be effective and pretty good. It allows him to make more runs and turns into spaces and great chances thanks to his high passing too. With his shooting it can be effective. However with 85 shot power it's not the best of power but it's certainly not bad either. His 89 long shots can allow him to sometimes shoot in the top left corner of the net. His finishing is okay for someone who plays on the wings. When he is in the wings he could cut inside and pass, make long passes on the other side of the pitch, great good accurate crosses. His passing overall is good enough if you want him to make the passes you want. His speed can also be a Con considering he has 98 acceleration and 96 sprint speed. Although he won't feel like the quickest player ever he can usually out pace players who have less than 90 pace. I would say I liked his passing best out of his card in the game. I think his price could be a little too much and he's still a good RM. 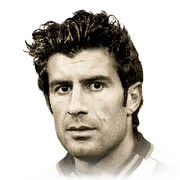 As the title states this card is unreal. I'm not sure how this card is under 1.2 million. I have Mbappe Headliner and while he's not on that level he's pretty damn close, I would say the only difference is body type and skill moves. Figo is nearly the perfect outside winger, but you may notice his body type is average rather than slim. If you use him at CAM/striker, he's perfect blend o...
Read full review

Good, but not Great (Prime Figo)

I crafted his SBC during TOTY grind as I had completed pretty much everything. I have used both his mid and his prime now and compared to his mid, his prime is a massive upgrade. There is significant improvement in his stats, but the main reason he is better is the H/L work rates. His movement off the ball is very noticeable and his positioning is one of his strongest qualities. He is a “right place, right time” type of...
Read full review

Did his SBC because i really liked him in real life and also im a sporting fan! I will admit i expected better, he is not terrible but wouldn't recommend at this stage in fifa. He will perform better at CAM or ST because of his strength that is unreal, also misses 5 star skill moves.
Read full review
0
/600
Update my avatar Dos and don'ts
Top Rated
New
Controversial
Show comments