Socrates has been a club legend in so many of my ultimate teams, and this year is no different. I play him at st or cam (alternate him and fekir based on the type of team I'm playing) in a 4-1-2-1-2 narrow.

At striker (yes he feels great at striker):

When at striker he feels great with his passing being amazing, he is big and can hold the ball up against most defenders, can score from about anywhere and can can create chances for the other striker since most defenders end up trying to close down on him leaving an open man in the box. His drawbacks at st can be that his agility isn't the greatest, and he falls a lot because of the balance and has to be played with his back to goal because he isn't the fastest, so he usually can't outpace centerbacks like kimpembe or varane.

I alternate him sometimes and play him at cam because his passing is simply amazing. I love playing him with another fast striker because his crossing, long passing, short passing and everything is just amazing. His low pace and low agility and balance aren't an issue at cam because his passing range is absurd and can pass out of most tight situations. He can shoot from anywhere, and score from the tightest angles. He is big and can win most battles in the midfield.

Overall the card is great, his height can be used if you like spamming crosses, especially with the power header trait. The low agility is really annoying at times, but there are so many times where I feel like however I shoot the ball, it will end up in the back of the net. I love this card, and I might upgrade to his mid version soon. For 400-450k coins, it is a great value icon, plus he's brazilian so he's easy to link.

4 Star skills - Can create chances off the dribble

Power Header - Speaks for itself really

Agility is a bit low

Isn't too fast, but isn't too slow 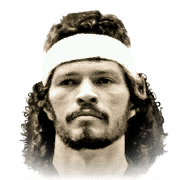 FIFA 22 meta might be great for Socrates, but he is still slept on. I play him as a CAM in 41212(2) and with the Hunter Chem Style, currently in DIV 3. He quickly became my main goalscorer despite having good ST in front of him. He can score finesse shots from 25 meters, inside the box, and scored a beatiful bicycle kick with his "weak" foot (he has none). His physical presence on the pitch due to height and body type is in...
Read full review
0
/600
Update my avatar Dos and don'ts
Top Rated
New
Controversial
Show comments