TOTS is inbound and with it some very nice cards to look forward to from Ligue 1 for those who put in their hard work this season, from a number of regular faces to some new faces and returning players too. 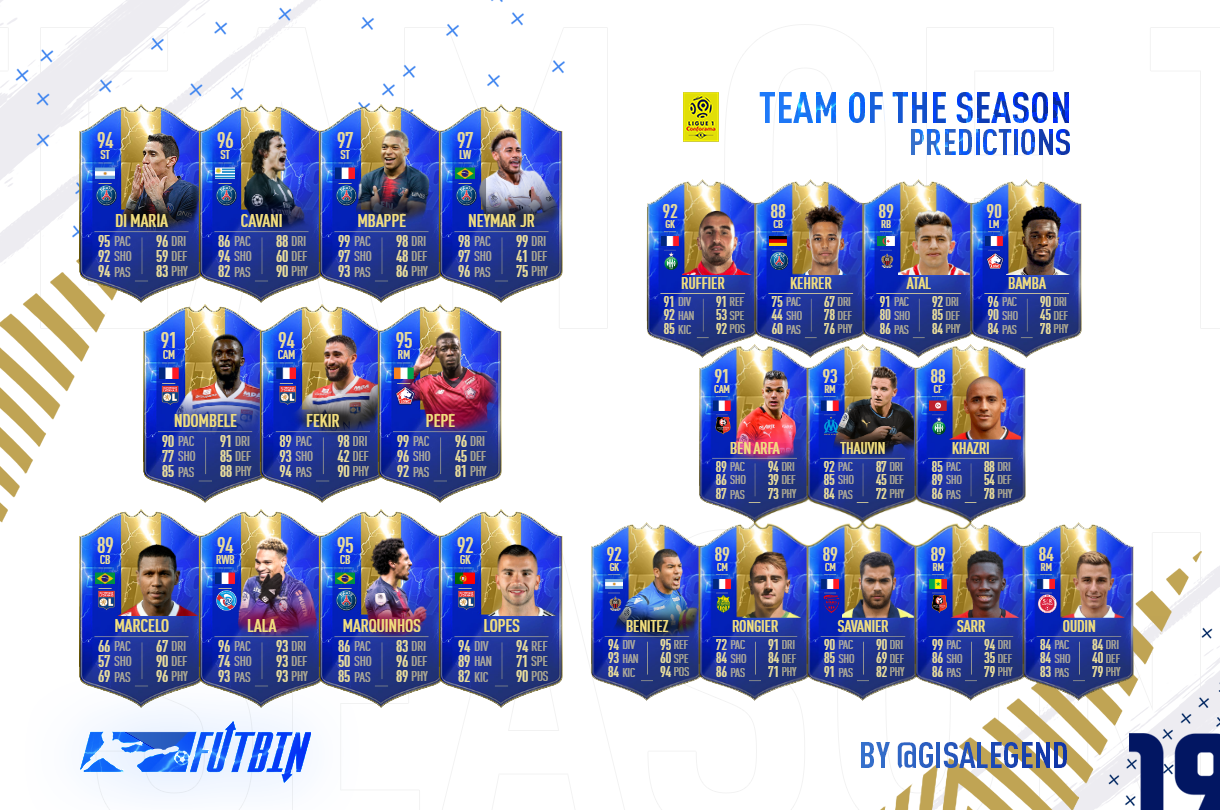 Anthony Lopes - GK - OVR 84 Lopes looks set for his annual TOTS Card, he has been consistent in net for Lyon as shown by them challenging for a Champions League spot and being impressive in the Champions League too.

Marquinhos - CB - OVR 85 Marquinhos has been key at the back for PSG as like Di Maria, Cavani, Neymar and Mbappe up top and seems set for a TOTS card.

Kenny Lala - RWB - OVR 78 Lala has been one of the bright lights in Ligue 1 this season as shown by the number of special cards he has, the TOTS Card should be his best card to enjoy this year.

Marcelo - CB - OVR 81 Marcelo has made the defence his own at Lyon and looks set for a TOTS Card as a result, due to his consistency.

Neymar - LW - OVR 92 Neymar may have had injury problems but when he's played he's been very impressive as shown by his goal return and with several special cards too, feel he may sneak in for a TOTS card too, only question though is that what his rating could be.

Nabil Fekir - CAM - OVR 85 Fekir has been 1 of the consistent cogs in this Lyon side as highlighted by multiple special cards, while others within the team or league may feature he deserves a TOTS though for his form all season despite regular transfer talk put on him.

Tanguy Ndombele- CM - OVR 80 With featuring in Most Consistent he may not feature in the Ligue 1 TOTS too but I would say his season has been consistent enough to merit a spot unless potentially Aouar is given this spot instead but feel he's earned though, would be a re-release of his current card.

Nicolas Pepe - RM - OVR 79 Pepe has found himself a key cog in the Lille team, with him rewarded with multiple special cards highlighted by his Headliners and POTY nomination in Ligue 1 the big question is if he won the award what rating will he get to make it stands out as an SBC & then we'd see a re-release as a TOTS card in due course so keep your eyes peeled.

Edinson Cavani - ST - OVR 89 Cavani has not been as prolific as past seasons but still scoring ample goals, looks set for another TOTS Card as usual for him but with PSG Forwards standing out potentially 1 or 2 may miss out.

Kylian Mbappe - ST - OVR 88 Mbappe has led the line standing out for PSG and as a result looks set for another TOTS card.

Angel Di Maria - ST - OVR 84 Di Maria has stepped up well alongside Mbappe at ST from usual RW, as highlighted by multiple special cards at ST, we'd assume if he gets a TOTS Card will be at ST & could be appealing to pair up in hybrids.

Stephane Ruffier  - GK - OVR 84 Ruffier has been a difference maker as part of that defensive unit at St Etienne with considerable saves made and while had the odd moment to forget, he has been key all season as they challenge for a European Place. Looks set for a regular TOTS spot.

Thilo Kehrer - CB - OVR 78 As with Marquinhos, Kehrer been consistent at the back and deserves a spot in at CB, but should have a strong shout featuring here and could be a neat addition at CB for hybrids.

Youcef Atal - RB - OVR 75 Atal has been running the Nice defence, challenging with a good balance of goals and assists to his name with a number of his performances have stood out as shown by the upgrade and with an IF Card at LW which was a strange position change, a TOTS Card looks set to be his highlight of the year and hopefully at RB.

Jonathan Bamba - LM - OVR 76 Bamba has been a key piece of the midfield/attack for Lille, as noted by multiple IFs and throughout the season he's stood out well and a TOTS looks set for him, as a result, joining Pepe in Lille's TOTS Club.

Hatem Ben Arfa - CAM - OVR 79 One of Rennes's key players who could prove a popular skiller option, the big question is though will he be passed on as shown with his Carniball card which was a neat addition despite no stamina, the TOTS would be a healthy boost still but would he be usable is the big question.

Florian Thauvin - RM - OVR 84 Thauvin has been a key part of Marseille's attack and as a result led to multiple special cards for him as shown by his League SBC card, his TOTS will be very appealing but not compared to previous though.

Wahbi Khazri - CF - OVR 78 St Etienne have been very impressive all over and could expect several TOTS Cards another possibly being Debuchy, we've opted for Khazri due to his consistency up top for them and helping them to a potential European spot.

Walter Benitez - GK- OVR 76 Benitez has been impressive in net for Nice as a result of their defensive displays, he has a chance of being the reserve GK as shown with 3 IFs.

Valentin Rongier - CM - OVR 79 Rongier has been a key part of the Nantes team despite their season being contrasting but he has been creating goals and a number of goals scored himself, been unlucky to not have more than an upgrade and IF but a TOTS could be a cheap addition to some clubs.

Teji Savanier - CDM - OVR 77 Savanier has been a key part of the Nimes team who have been in the top half of the league all season, his performances have stood out all season, was unlucky to not get an upgrade or more special cards but this TOTS would be a worthy addition.

Ismaila Sarr - RM - OVR 76 Sarr has been a key part of the Rennes midfield alongside Ben Arfa while others may get the nod over him, his efforts can't be knocked at least in the league and Europa League, has a strong shout to be in though could be another potential SBC or objective card.

Remi Oudin - RM - OVR 68 Oudin has been a key part of Reims season, despite a recent wobble where they were still challenging for a European place, his form has been key and while he may be a base card silver going to a more appealing gold TOTS, he would be the lowest rated but despite that is still deserving of a spot, could also end up as an objective or SBC instead potentially.