First it was Gabby Jesus, then Saint-Maximin, and now we look at none other than the Rat King himself; Wissam Ben Yedder.  At this point, we really are just running the gauntlet of OP FUT legends.  You know it’s bad when Ben Yedder himself knows his FUT card has been the cause of many a broken controller.  Shortly after scoring the brace that earned his TOTW1 inform, Ben Yedder took to Twitter (if you don’t follow him it is actually hilarious) to warn of the impending doom that was coming our way.  Fortunately, that card is insanely expensive and I have only had the pleasure of being torn apart by 86 Ben Yedder twice.  Unfortunately, the NIF has been coming down in price now that it is in packs and has also given me a few lessons in the importance of defending so far this year.  I was interested to see if I could get some of the same output using WBY myself and picked up the Frenchman for 133k… applied a HUNTER chemistry style… and played Ben Yedder alongside IF Saint-Maximin in my 4-4-2 formation.  All weekend long Ben Yedder was the glue holding together the following squad: 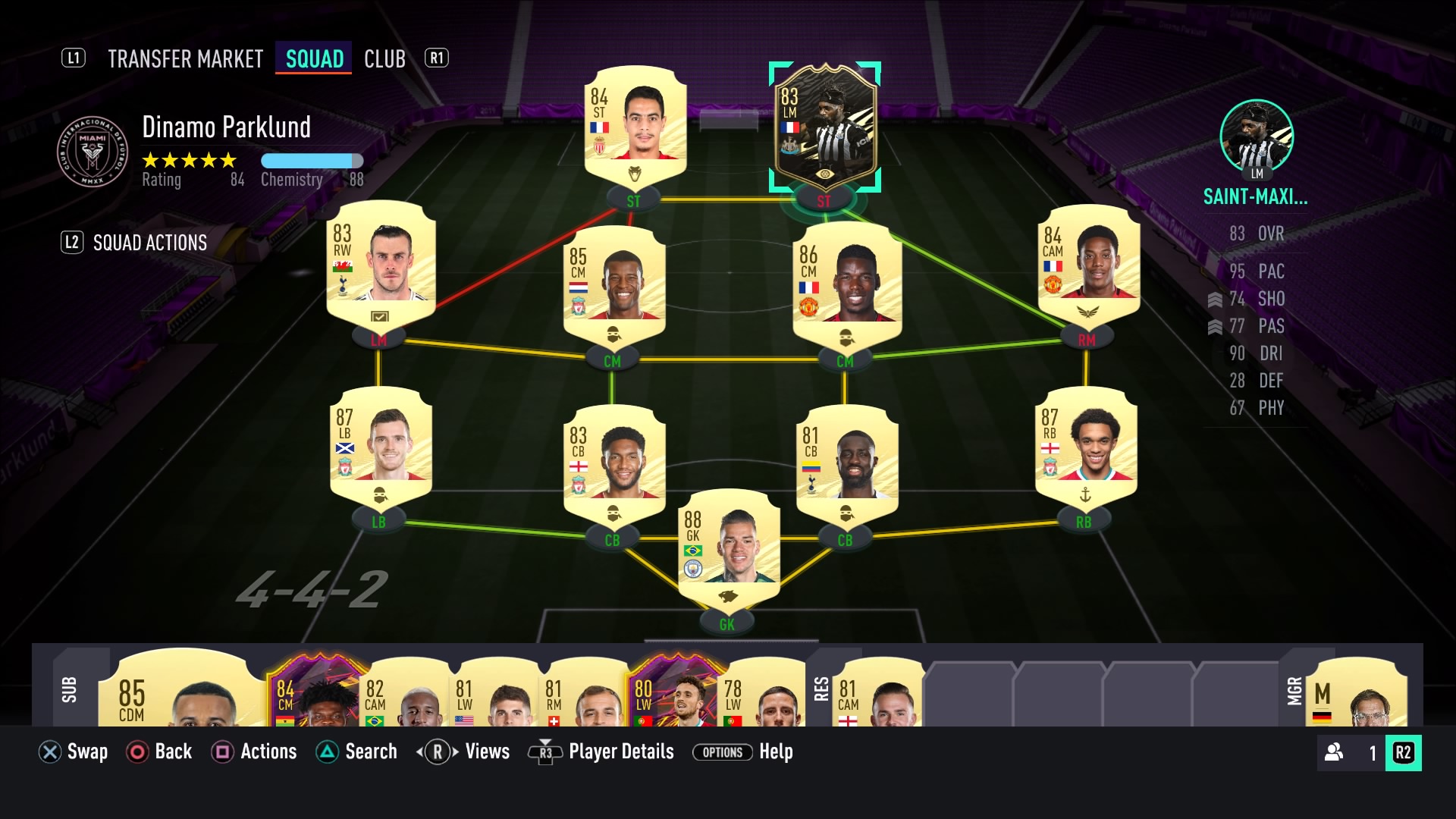 This is one of those Bobby Firmino moments when looking solely at the statistics will sell you way short on what the player brings to a squad.  Honestly, I sit here looking at the 17 goals and 8 assists in 20 matches and can only wonder, how?  I swear it felt like Ben Yedder was going toe to toe with Saint-Maximin all weekend, but in the end was well short of the production “Gucci” brought to the squad.  The reason… Ben Yedder was pivotal to the build-up in my attack, often creating space and chances with his silky dribbling frenetic pace.  The 91 AGILITY and 89 BALANCE on this card made close control dribbling feel effortless, while the 96 ACCELERATION and 92 SPRINT SPEED slingshots Ben Yedder out of the dribble and into space.  From this point, defenses are reeling and the extra body in attack led to numerous openings in my opponent's backline.  While Ben Yedder did not always directly reap the rewards of a goal or assist, the first clip in my video truly demonstrates the movement and quality I am talking about.

I think you could have guessed that this was coming… with 98 FINISHING Ben Yedder certainly knows where the net is … and with 88 SHOT POWER he can put it where he wants in a hurry.  At this point Ben Yedder is the most lethal player I have used in terms of chance conversion rate; late in a match, scores level, the ball falls to one player of your choice who would you choose? I know I would want it to be Ben Yedder for sure.

Again, not much I am telling you that is not already known about this card, and that is exactly why he was, is, and will continue to be one of the best cards in FUT.  I will say that the 5 STAR WEAK FOOT in FIFA 21 seems more dominant than ever and the difference between feet was not noticeable in game… the word I would use is pure and it looks effortless whenever Ben Yedder hits the ball.

50k… that is currently the difference between Martial at 195k and Ben Yedder at 145k.  The Premier League is always going to add a certain percentage increase to any player, and of course the 84 BASE PACE of Ben Yedder is not as “FUT Sexy” as the 89 with Martial.  But when you break it all down the superior shooting (especially finishing), first-class dribbling, and then mix in the 5 STAR WEAK FOOT vs a 3 STAR and Ben Yedder is simply the better option for me.  Having used Martial I can say that I do not believe he is really overpriced, and therefore makes me feel like Ben Yedder is beyond fair value at this point.

This card has some serious upside … but there were some hiccups along the way.  We have already discussed the positive attributes, but the negative attributes need to be mentioned as well.  Notably, Ben Yedder’s size, or lack thereof.  Standing at 5’7 (170cm) and with only 79 JUMPING this card is never, ever, winning a contested header in the box.  While there were numerous chances, none found their way to the net and in fact, I don’t recall Ben Yedder even getting his head to the ball.  WBY’s short stature is only amplified further by his 63 STRENGTH and means you have to constantly focus when Ben Yedder receives the ball to make sure he is in movement away from defenders.  Finally, the 71 LONG SHOTS is also a small issue given the return of outside the box pile drivers in FIFA 21… this issue was made even worse by the fact I wanted to use the HUNTER chemistry style, which of course leaves the long shots untouched.

I should probably point out that I obviously used Ben Yedder in a different role than most by having him dropping back and building the play versus finishing it.  While this was extremely successful for me and my run to Division 1, I have also been on the other end of a good old fashioned pummelling from opponents using this card.  In the short amount of time, I have owned and played FIFA 21 I can recall no less than three occasions where my opponents Ben Yedder has walked away with the match ball, flashing that rat smile at the camera, having just decimated my defense.  In the end, whichever way you use this card is going to be a huge improvement to your squad. For me, my first clip sums up why I found him so effective; picking the ball up from deep, amazing acceleration, nice distribution, fantastic run, and an assured left-footed finish that gives the keeper zero chance.  Regardless of how you deploy him, Ben Yedder has the goods to deliver and the consistency is a welcome addition to any squad.  Cheers for reading. 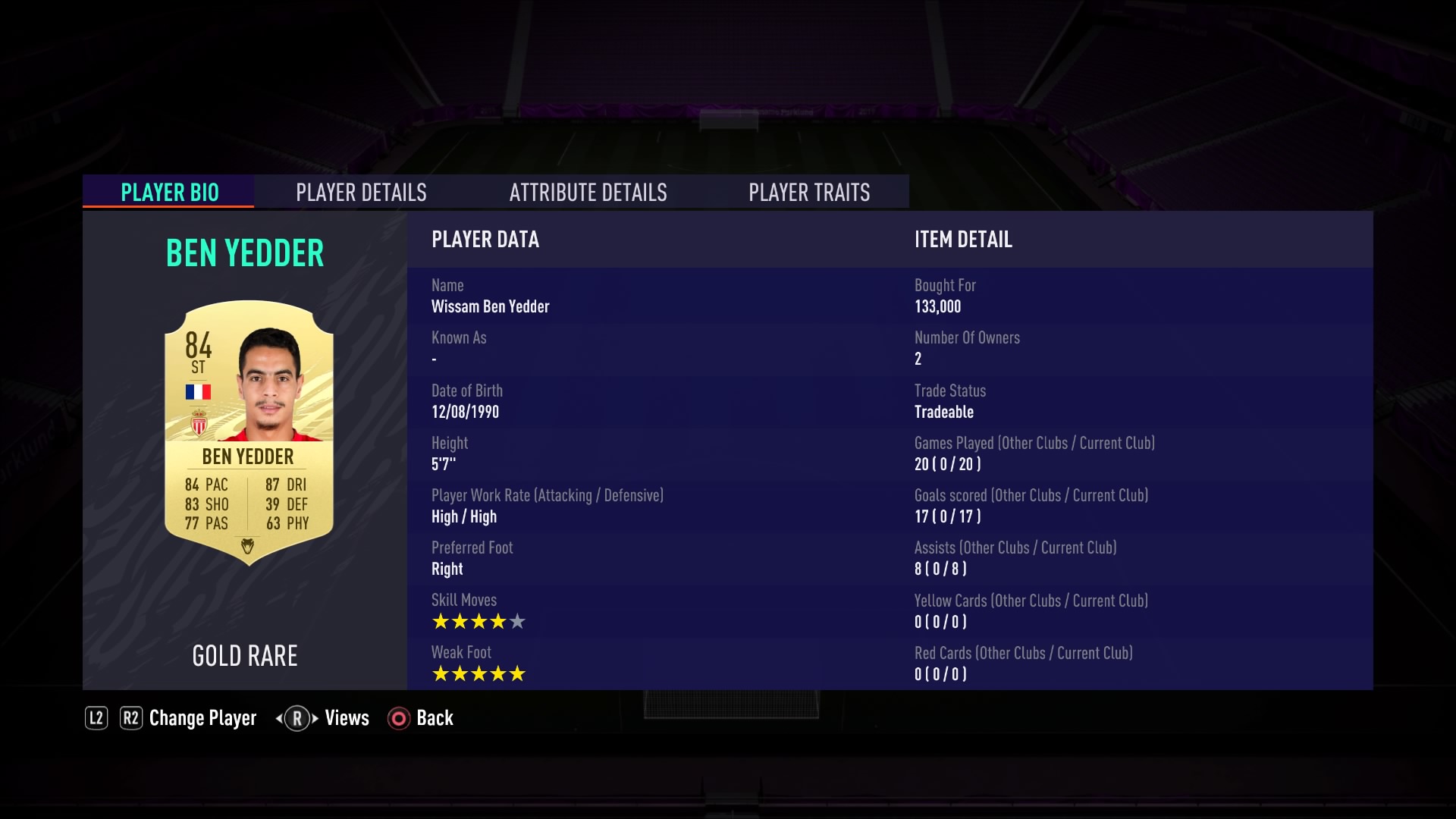