It was a difficult week as far as predictions go with options being few and far between. A lack of big names does mean we could be in for a surprise or two on Wednesday but headlining for me is Hummels, Benzema and OTW Bale! 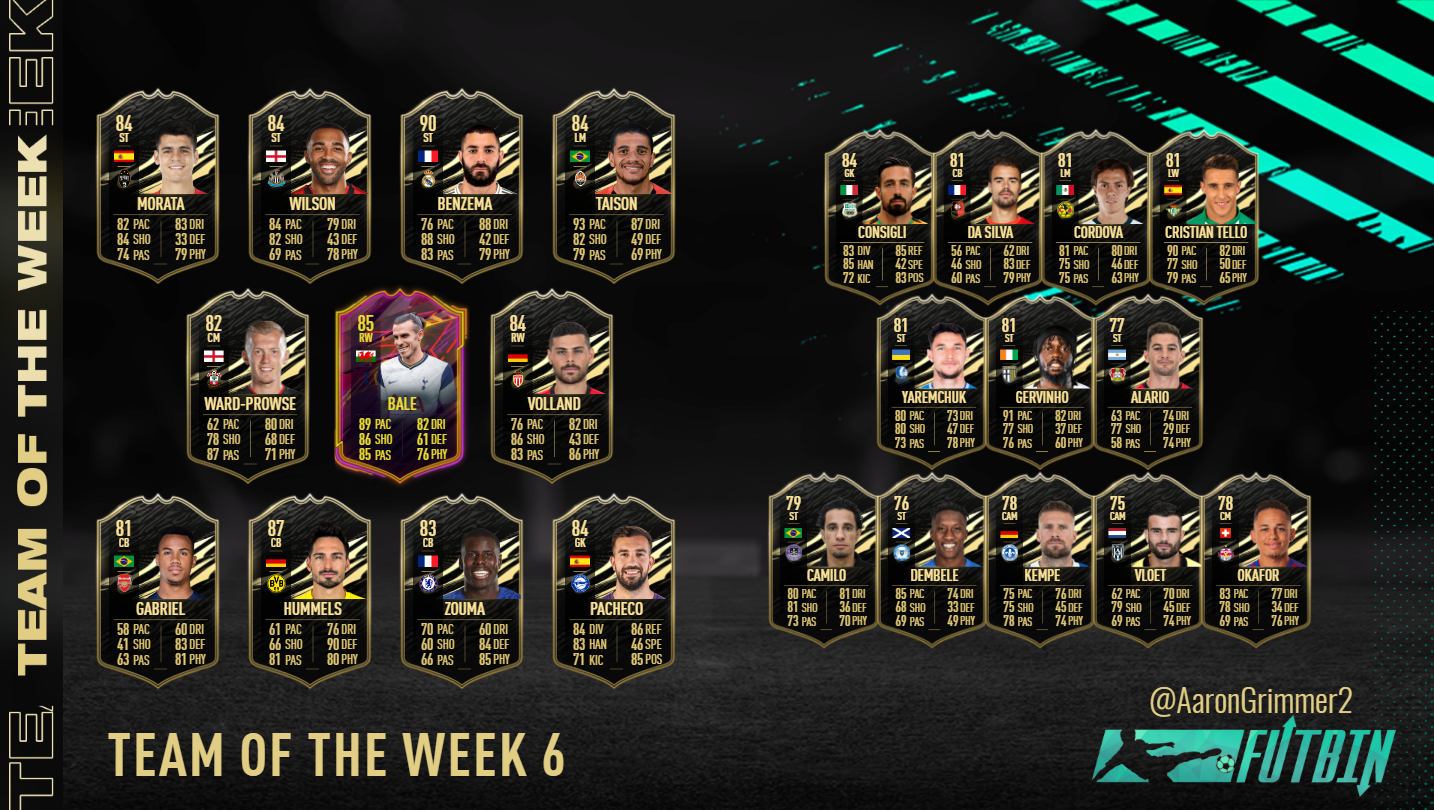 Pacheco – GK - OVR 82>>84
Barcelona’s poor form continued with a 1-1 draw with Aalves being their latest of a run of disappointing results and now sit at a shocking 12th in the table as a result. As for Pacheco he made a total of seven saves to deny Barcelona taking all three points, claiming MOTM from Marca with a perfect three-star rating.

Mats Hummels – CB - OVR 86>>87
Hummels was remarkably close to making the side last week and had it have not been for Guerreiro’s heroics he probably would have been. This week however there is no doubt surrounding his inclusion with the German scoring twice from the back and keeping a clean sheet in Dortmund’s 2-0 win.

Gabriel – GK - OVR 78>>81
Gabriel has been a brilliant signing for Arsenal so far, proving that a decent CB was crucial for their side and Gabriel should be a part of that side for many years to come. He looks set to pick up his first IF for the club after a dominant defensive display against Manchester United. He was awarded a 9/10 match rating for his contribution towards the clean sheet with an Aubameyang penalty being the difference between the two sides.

Kurt Zouma – CB - OVR 80>>83
Now I am likely to get a lot of stick for not including Ziyech in this side but Zouma was officially named MOTM and after the Thiago Silva snub last week I’m not so sure how desperate EA are to boost their OTW items. Ziyech obviously stands a chance but Zouma is the man who realistically should make the cut. He scored once again for Chelsea this weekend as they continued their good form with a 3-0 win over Burnley

Taison – LM - OVR 81>>84
I was hesitant on this inclusion to start with but after thinking about it EA seems to like the obscure Brazilians at the moment with Paulinho, Teixeira and Talisca all recently featuring in their promo’s due to that I think it’s an additional reason for EA to opt for Taison over other options. The Brazilian scored twice in Shakthars 4-1 win, although one was from the penalty spot.

James Ward Prowse – CM - OVR 79>>82
One of the more enthralling games this weekend saw Southampton come out on top against villa by four goals to three, despite a late scare. Ward Prowse was magnificent throughout, scoring twice and assisting another. It’s a shame that JWP never really reached his potential on a consistent basis as he could have been a brilliant player.

Gareth Bale – RM - OVR 83>>85
This one is obviously a punt so I wouldn’t invest in this prediction alone but there is a good reason for EA to include the Welshman. This side is lacking a big name and Bale allows them an inclusion of not only that but an OTW increase too. He came off the bench to score the winner after only 200 seconds on the pitch and claimed MOTM for his contribution by doing so.

Kevin Volland – RW - OVR 81>>84
Both Ben Yedder and Volland received an 8/10 from L’equipe this weekend bt the more likely of the two is Volland, who played a deeper role and has not yet been included in TOTW. I would probably pick Volland either way with the German scoring twice in Monaco’s 4-0 win over Bordeaux rather than a goal and an assist from Ben Yedder.

Morata – ST - OVR 82>>84
Now many predictions are likely to include Ronaldo for his two goals off the bench but with him, he rarely gets off the mark in terms of IF’s without a hat trick, especially this early on. So, while I can’t see them ignoring Juventus completely, I don’t think it is Ronaldo’s week. Morata is the man I am opting for after his goal and assist saw Gazzetta award him an 8/10.

Callum Wilson – ST - OVR 78>>82
Everton’s fast start to the season is quickly coming to a halt, now without a win in three and back to back losses to their name. The latest came in a disappointing 2-1 loss to Newcastle. Wilson, who has been one of the best signings of the summer so far continued his goalscoring, scoring both goals for the magpies.

Karim Benzema – ST - OVR 89>>90
Benzema received a fully deserved upgrade for this FIFA taking him to an 89 rated card in the game, making him one of the best strikers in the game, in terms of rating and I think that is a fair evaluation of the Frenchman. Another upgrade looks set to be on the way for him after scoring twice and assisting another in Madrid’s 4-1 win over Huesca. For those questioning it, Valverde simply can’t be included in this side, even if he deserved it.

Andrea Consigli – GK - OVR 81>>84
Sassuolo recorded an impressive 2-0 win away from home against Napoli and while there is no clear cut IF I feel as though there is a good chance for Consigli to get the nod. The Italian made a total of six saves to keep his clean sheet intact. Gazzetta only awarded him a 7 which is worrying for his chances but it's still enough to make my side.

Damien Da Silva – CB - OVR 77>>81
With most of Ligue 1’s top performances coming from players who have recently picked up IF’s, it was difficult to select from the division, other than Volland. The likelihood is that they will pick up around three IF’s though. Due to that, I am opting for Da Silva who scored one of Renne's goals in their narrow 2-1 win.

Sebastian Cordova – LM - OVR 75>>81
This was quite a late fixture on Sunday evening so hopefully it doesn’t get overlooked. Cordoba was fantastic for Club America in their 3-1 win this weekend though with two goals and one assist to his name. Another question surrounding this inclusion however is if they want to include two Liga Mx players which going from other divisions is unlikely. Cordova deserves a spot in this side though.

Cristian Tello – LW - OVR 78>>82
Real Betis have been rather inconsistent this season so far losing four and winning four of their eight fixtures thus far. Sunday saw one of their better performances though with a 3-1 home win over Elche. Tello was involved in all three of those goals with two goals and one assist, securing his spot in TOTW 6.

Roman Yaremchuk – ST - OVR 75>>81
Yaremchuk has narrowly missed out on several occasions this FIFA already but he is practically already confirmed for TOTW 6 after he found himself scoring a hat trick during Gent’s 4-1 win. With him being a gold item rather than a silver it secures his spot in the side.

Gervinho – ST - OVR 78>>82
When it comes to FIFA Gervinho is used mainly for pace in the game and with his potential IF also comes a positional change, which if anything makes him more attractive for exactly that. He gets the recognition after scoring twice in Parma’s 2-2 draw with Inter Milan, with Gazzetta awarding the forward an 8/10.

Alario – ST - OVR 77>>81
The Bundesliga only really offered a few options for IF selections this week and thus those who have potential are likely to go on to make the cut. Alario played a big part in Leverkusen’s 4-2 win over Freiburg, scoring twice and claiming MOTM with a 2.0match rating.

Tobias Kempe – CAM - OVR 70>>78
EA keeps opting for the lower German league player of the week and thus when viable I will happily select him too. This weekend saw Kempe score twice and assisted another two in a 4-3 win for Darmstadt and it saw the German receive a 1 match rating from Kicker. He surely must make this side.

Noah Okafor – CM - OVR 71>>78
Salzburg is a side that often gets ignored in TOTW but despite the high number of contenders for the reserve section again this week I find it difficult to think that Okafor won’t make the cut. The Swiss midfielder scored three goals during a 5-0 Salzburg win this weekend and that gives him preference over multiple strikers for me.

Rai Vloet – CM - OVR 65>>75
Talking of midfielders with insane performances this week we move onto Vloet who was involved in four goals this weekend with three of his own going alongside an assist in Heracles’s 4-1 win over Utrecht and although EA seem consistent on just one IF for the division each week once again they deserve more.

Siriki Dembele – GK - OVR 67>>76
Peterborough went to the top of League 1 on goal difference after recording a convincing 5-1 win this weekend. Dembele found himself within the goals scoring three of those five goals. There are a few hat trick I have opted to ignore this week though and Dembele would probably be the man to miss out if EA opted for a different hat trick.

Camilo – ST - OVR 72>>79
It’s always a difficult task to distinguish between the hat tricks in the reserves section and this week is no different with many likely to miss out. Camilo gets the nod over other options simply because he had an additional assist though and I am confident that EA will take the same approach on this one.