TOTW 20 is not the most exciting of sides with only a few stand-out players being surrounded with somewhat fodder. That being said there have definitely also been far worse sides this FIFA, with Varane, Ibrahimovic and an upgrade to Oyarzabal looking likely this coming Wednesday 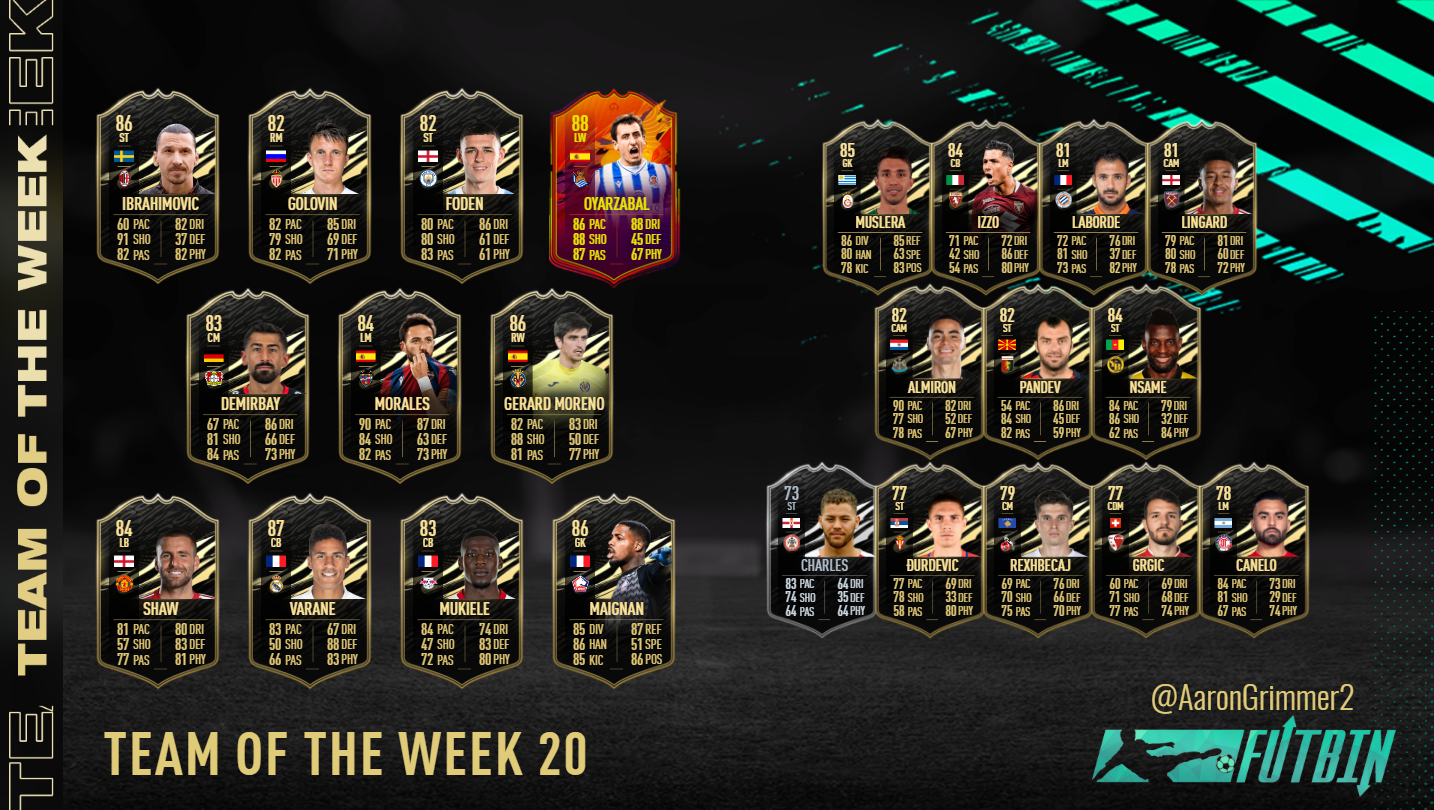 Mike Maignan – GK - OVR 82>>86
Although Ligue 1 had two sets of fixtures this week from the first there were very few options. Maignan was named Player of the week though after making four saves for Lille in their 3-0 win over Bordeaux. The 8-match rating he received from L’equipe is almost always enough to see a goalkeeper included in TOTW

Luke Shaw – LB - OVR 81>>84
Shaw has seriously impressed all season for United after falling out of the pecking order for Jose Mourinho in recent years. He looks to be a completely different player this season though and has arguably been the best LB in the division so far. Once again, he excelled during Manchester United’s 9-0 demolition job of Southampton on Tuesday, being named MOTM for his two assists and defensive performance. There could well be a second United player under the circumstances, but Shaw is seemingly the best option.

Raphael Varane – CB - OVR 86>>87
One of the more obvious selections this week comes with Varane after the Frenchman scored twice for Madrid, spearheading them to a 2-1 win away at Huesca. It's very rare to see a gold defender with two goals miss out, let alone when those two goals are coming from an elite player like Varane. Although he wasn’t even in the running for TOTY this year I am certain that we will see him reach the top of the game once again in the coming years.

Nordi Mukiele – CB - OVR 80>>83
Many already use Mukiele’s record breaking card as a CB but now you will be able to get him on full chem after he scored one of Leipzig’s three goals and claimed MOTM in their 3-0 win over struggling Schalke. Angelino also picked up two assists but with question marks surrounding his position and the fact that Mukiele was MOTM I would be very surprised if anyone other than the Frenchman was selected.

Morales – LM - OVR 79>>84
Although Morales featured in TOTW 15, EA looks to be far more lenient in their decision process now and thus I can’t see this being a reason for his exclusion. The Levante midfielder scored both their goals as they recorded a 2-2 home draw with Granada. Should he end up making the cut he looks set to be a strong IF as far as cheap ones go.

Kerem Demirbay – CM - OVR 80>>83
Leverkusen dominated Kickers team of the week after their 5-2 win over Stuttgart with Diaby, Bailey and Demirbay all making the side. Karem is the obvious choice for TOTW though after being named MOTM with a 1.5 for scoring two of those five goals from the middle of the park.

Oyarzabal – LW - OVR 84>>87
Isak would have probably been the player included in this side had he has not been in the future star promo but seeing as he is, Oyarzabal is likely to take his place instead, luckily for headliner owners and annoying for POTM owners. The Spaniard added another two goals to his already impressive tally during Sociedad’s 4-1 home win over Cadiz.

Alexandr Golovin – RM - OVR 79>>82
Bottom placed Nimes put up a strong fight when hosting Monaco this weekend but still ended up on the wrong side of a seven-goal thriller. Largely down to the magnificent display of Golovin. It does appear that he played out wide rather than his usual central role but regardless of position his three goals and one assist has him walk into this side.

Gerard Moreno – RW - OVR 83>>86
There were a lot of options in La Liga coming from draws which often does hurt players' chances of making the final side but at the same time, strong options are often included. Moreno falls into the latter after scoring twice in Villarreal’s 2-2 away draw with Elche. It would be the Spaniard’s second IF of the year to keep up with his plethora of special items over the past couple of seasons.

Phil Foden – ST - OVR 79>>84
Many, myself included would have expected Gundogan to be named MOTM from City’s 4-1 win over Liverpool. A result which practically means the title is theirs to lose already. Despite the German continuing his brilliant form with two goals, it was instead Foden who was named MOTM for his goal and assist from what looks to be a ST role, at least on the starting line-up anyway. With Gundogan very likely to be awarding POTM in the coming days I am more than happy to opt for Foden for this side.

Zlatan Ibrahimovic – ST - OVR 83>>86
Ibrahimovic managed to reach a tally of 500 club goals this weekend making him only the 51st player to do so. That is not the reason he makes the side though, instead, it is for a brace which helped Milan to a 4-0 win over Crotone. A result which helped lift them back to the top of the Serie A table

Fernando Muslera – GK - OVR 82>>85
Muslera has been brilliant this week, putting in two TOTW performances, which for a goalkeeper is quite something. Firstly, he saved a penalty alongside making three other saves during a 3-0 win over Baseksehir before then being named MOTM in Galatasaray’s 1-0 rival win over Fenebache, making a total of fives saves. Donk did get both a goal and an assist during Gala’s first win however I feel that the rivalry match edges it the way of Muslera this week.

Armando Izzo – CB - OVR 79>>84
This is one of the more out there punts I will probably take while predicting but after hitting Milinkovic Savic last week and the inclusion of Chiellini happening it's one with good reason behind it. Izzo despite not scoring or assisting in a 3-3 draw away at Atlanta was named MOTM for Torino with a 7.5 match rating. With a lack of clear cut options in the division, it makes him one of the highest scoring players and thus is selecting as a punt for TOTW 20.

Gaetan Laborde – LM - OVR 76>>81
There were a lot of lower-rated midfielders putting in impressive shifts which do make the selection process difficult but at the same time I prefer it to have next to nobody for selection. Laborde is one of the better options though after scoring twice and assisting another during Montpellier’s 4-2 home win over Dijon

Jese Lingard – CAM - OVR 77>>81
Lingard had become somewhat of a “meme player” during his time at United after what was a promising start to his career. West Ham decided to take the punt on him during the latest transfer window and its started in superb fashion. The Englishman scored twice during a 3-1 West Ham win on Wednesday, helping them to yet another impressive result for the Hammers.

Miguel Almiron – CAM - OVR 78>>82
With Southampton coming off the back of a 9-0 loss to Manchester United it looked as though it was going to continue for them, finding themselves two down after just 25 minutes. They did put up a battle though, losing 3-2 in the end. Almiron scored two of Newcastle’s three goals which should be enough to see him sneak into the side.

Goran Pandev – ST - OVR 72>>82
Thankfully Pandev has already picked up a special item as without one this would have been a difficult call but with that hero card, it makes him a gold option for selection and thus his two goals for Genoa in their shock 2-1 win over Napoli is likely to result in an IF for the forward. Gazzetta awarded him MOTM with a 7.5 match rating.

Jean-Pierre Nsame – ST - OVR 78>>84
Young Boys look set to walk the division in Switzerland, now 10 points clear of second place Basel with a game in hand. This comes after an Nsame hat trick spearheaded BSC to a 4-2 home win over Lausanne

Alexis Canelo – LM - OVR 70>>78
We have a highly competed for reserves section this week from which I can’t see anyone without a hat trick entering. Cancelo starts us off with his three goals from LM during Toluca’s 4-1 home win over Mazatlan. I always feel that the midfielders get preference over the strikers in these situations and thus I doubt he will miss out.

Anto Grgic – CDM - OVR 68>>77
There were a few top-end performances over in Switzerland this week but obviously due to the division it is unlikely to see multiple players from the division in a singular week. I feel that due to his position that Grgic really stands out. Playing a CDM role the Swiss midfielder managed to bag himself a hat trick for Sion in their 3-2 win over St Gallen.

Elvis Rexhbecaj – CM - OVR 71>>79
I did mention how it was unlikely that anything less than a hat trick would do for the reserves this week, but an exception can easily be made for Rexhbecaj after he was named POTW in Germany for his two goals in Koln’s 2-1 win over Gladbach this weekend. With limited options from the division, I can’t see their POTW missing out.

Uros Durdevic – ST - OVR 69>>77
Sporting Gijon continued their push for promotion with a convincing 4-0 away win over Logrones. I almost missed their striker this week due to finding him difficult to find on the database, but he is there and thus should make TOTW 20 after scoring three times.

Charles – ST - OVR 63>>73
Accrington Stanley managed to record an impressive 6-1 home win on Tuesday as they continue to search for a place inside the League 1 playoffs. Charles scored three of their goals and although it comes from a midweek match, I can still see him making the side on Wednesday.