TOTW 21 is an interesting one, a largely mediocre side with a few gems hidden within. A first Premier League hat trick for Aubameyang and a central defender Mendy are the most exciting players but with Kroos and Lukaku also likely to feature it's not a week to overlook. 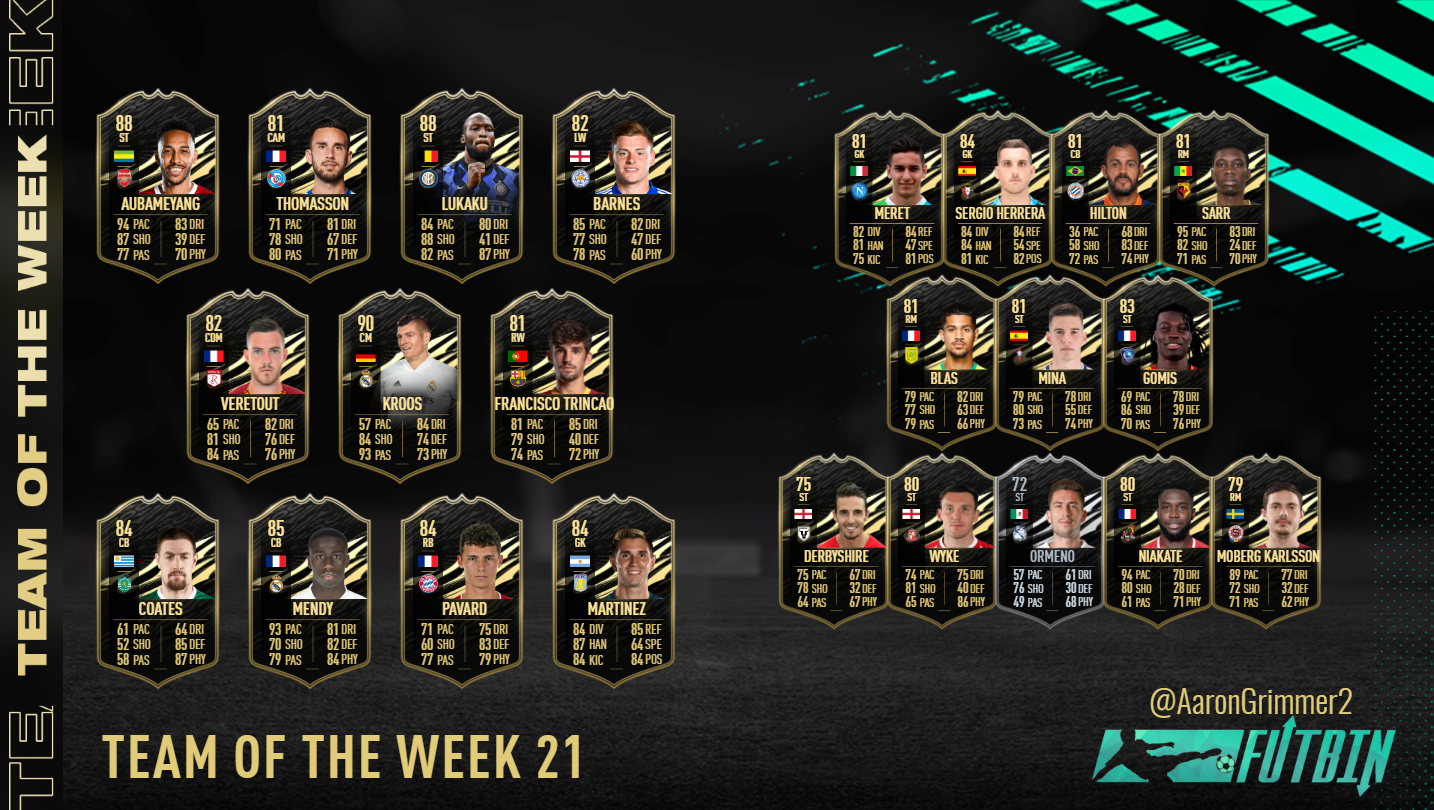 Emilano Martinez – GK - OVR 78>>84
Martinez has to be up there with the best signings this summer. The Argentine has played a crucial part in the improvement of Villa’s defence this season, which has helped them progress tremendously. He made a total of nine saves on Saturday during a 0-0 draw with Brighton, which he claimed MOTM for. Arguably been the best keeper in the prem so far this season.

Ferland Mendy – CB - OVR 83>>85
Everyone has been waiting for Mendy to pick up an IF with many classing him as the best LB in the game to this point. It now looks like the Frenchman could be on his way to an IF however, there is a twist, it comes via a CB. Mendy scored one of Madrid’s two goals during a 2-0 win over Getafe on Tuesday while playing as a part of aback three and thus offering a very interesting IF.

Sebastian Coates – CB - OVR 81>>84
When it comes to the Portuguese division it’s safe to say that EA has been rather stingy on the IF front with several players getting snubbed on a regular basis. Surely Coates can’t be added to that list come Wednesday though after the defender helped Sporting turn the match around by scoring twice to come from behind, including a last-minute winner, in their 2-1 win over Vicente.

Benjamin Pavard – RB – OVR 81>>84
Until last year the Club World Championship was not noticed by EA but with Firmino making TOTW in FIFA 20 for it, I see no reason why Pavard won't this time around. The Frenchman scored the only goal of the game as Munich lifted the title via a 1-0 win over Tigres. The fact Bundesliga options are so few and far between will only help his cause here.

Harvey Barnes – LM OVR 79>>82
There are a couple of difficult calls this week simply down to recent promo cards with Barnes being one of them. The youngster featured in EA’s first future star side but considering there is over a week gap and the IF will be significantly lower rated and a different position, I can still see him being selected. Barnes was named MOTM for Leicester as they recorded a 3-1 win over Liverpool this weekend. Alternatively, we could see Ndidi but it would be Barnes promo aside.

Toni Kroos – CM - OVR 88>>90
It's rare that you see two players from the same side selected for TOTW but when they come from separate matches, I can see exceptions being made. Kroos gets the nod from Madrid’s second fixture of the week from which they recorded a 2-0 win over Valencia with the German scoring one and assisting the other.

Adrien Thomasson – CAM - OVR 77>>81
Thomasson was by far the best option from France after he scored both Strasbourg goals in a 2-1 away win over Metz. L’equipe awarded him an 8/10 which was the joint highest score of the week. It was a result which was definitely needed for the away side, putting the six points above the drop.

Jordan Veretout – CM - OVR 79>>82
Roma climbed into third place this weekend, ahead of Juventus, after a comfortable 3-0 home win over Udinese. Veretout was named MOTM after scoring the first two of those goals with Gazzetta awarding him a 7.5 match rating. It’s going to be a big couple of months for Roma as they look to confirm their spot in the Champions League for next season.

Trincao – RW - OVR 78>>81
There is a strong argument for Messi to be included this week but as is often the case Messi will get snubbed due to his rating alone and thus although he got two goals and an assist, I can’t see him making the side. Instead, we look towards Trincao who impressed on the wing scoring two goals himself as Barcelona recorded a dominant 5-1 win over Aalve

Aubameyang – ST - OVR 87>>88
Both Arsenal and Aubameyeng suffered from shocking starts to the season but things look to be turning around with Arsenals results significantly improving the past couple of months and now it appears that PEA is back within the goals too. The Gabon international scored his first Premier League hat trick vs Leeds on Sunday with the hosts coming away with a 4-2 win.

Romelu Lukaku – ST - OVR 85>>88
Lukaku was snubbed in favor of Martinez recently but the same won’t occur this time around with the Belgian practically guaranteed a spot in TOTW 21. That is after he scored twice and assisted another to help Inter remain top with a 3-1 win over Lazio. Lukaku went on to be named POTW in Serie A

Alex Meret – GK - OVR 78>>81
It’s been a while since Juventus have not won the title in Italy, but it is looking ever more likely that they will fail to lift it this season. Napoli was the latest side to inflict defeat on them via a 1-0 win. Meret was named MOTM after making six saves to deny Juventus and although there were multiple keeper options this week, I feel that considering it was against Juventus that Meret will get the nod.

Sergio Herrera – GK - OVR 76>>84
Do I actually believe there will be three gold keepers in TOTW? Probably not but with three very strong candidates, I would rather get both keepers correct than lose a point elsewhere. Herrera was fantastic for Osasuna this weekend, making six saves in total alongside saving a penalty to ensure his clean sheet was kept during a 1-0 win over Levante.

Hilton – CB - OVR 77>>81
EA is becoming very predictable with their Ligue 1 CB selections with one making it almost every week. Following this trend, Hilton should be an easy choice with the Brazilian being the only gold defender with a 7 this week. It comes for a brilliant defensive performance as Montpellier shocked Lyon with a 2-1 win.

Ismaila Sarr – RM - OVR 78>>81
At one stage it looked as though Sarr was going to be a breakthrough talent but perhaps at 22 his career is not taking the path many expected, playing in the Championship for Watford. This weekend saw Watford run away with a 6-0 win over Bristol City from which Sarr was heavily involved though, both scoring and assisting twice from RM.

Ludovic Blas – RM - OVR 76>>81
Options were few and far between when it came to France this week, making it difficult to fit even one player in. Blas is one of the better options after providing two assists during a 3-1 win for Nantes with L’equipe awarding him an 8/10.

Santi Mina – ST - OVR 76>>81
La Liga seemed very straightforward for predictions this week with several players standing out. Mina is another who looks an easy inclusion after he scored twice in Vigo’s 3-1 win over Elche on Friday. Nolito also assisted twice but it will inevitably be Mina who makes the final cut.

Bafetimbi Gomis – ST - OVR 80>>83
The Saudi league was a goal fest this weekend with a ridiculous number of players in with a strong shout of making TOTW. The first is Gomis after he bagged himself four goals in Al Hilal’s 5-0 home win. The first three of those goals all came from the penalty spot but regardless of that you simply can’t ignore four goals, especially from a gold card

David Moberg Karlsson – RM - OVR 73>>79
Sparta Prague finds themselves in a difficult situation with Slavia continuing to win it looks as though they will never close the 10-point gap which was formed early on in the season. They continue to play their football and steadily pick up three points in the majority of matches. Their latest match saw them battle towards a 4-3 home win from which midfielder Karlsson scored three of their four goals. There were a lot of hat tricks this week but as I often say, I will usually favor midfielders.

Santiago Ormeno – ST - OVR 62>>72
Ormeno is probably the easiest hat trick to ignore this week with him being a bronze and with one being from the spot. So, if EA decides to opt for either a goalkeeper or defender in the reserves once again, I expect Ormeno to miss out. That being said he is still fully deserving of a spot in the side after his three goals helped Puebla to a 4-0 home win over Juarez.

Youssoufou Niakate – ST - OVR 71>>80
I almost ignored Niakate in the hope that he would be the silver star this week, but I have a feeling that a promo future star could be used instead. One way or another I fully expect to see Niakate on Wednesday after he scored a hat trick for Al Wehda in their 4-2 away win.

Charlie Wyke – ST - OVR 64>>80
Sunderland offered three very strong candidates for TOTW this week and if club limitations were not a thing, I would have all of them in this side. As things stand though only one will end up making it and that is very likely to be Wyke after he scored all four of their goals. Honorable mentions go to both McGeady and Burge though after they assisted four and saved two penalties retrospectively.

Matt Derbyshire – ST - OVR 65>>75
Macarthur FC is a new side in the A-League but has already shown themselves to be a highly competitive side. Eight games into the season they currently sit in second position, their latest win coming via a comfortable 4-0 win over Adelaide. Derbyshire, a former Blackburn and Nottingham Forest player, stole the headlines scoring three times and assisting another.