TOTW 3 is a difficult one with not a lot of big-name performances being available for selection. There are a few on the border of selection but honestly TOTW 3 looks set to be a disappointing side. That being said there are a few players in the prediction worth getting excited for with a potential Hernandez, Foden, central Lemar and a featured boost for Embolo all on the cards. 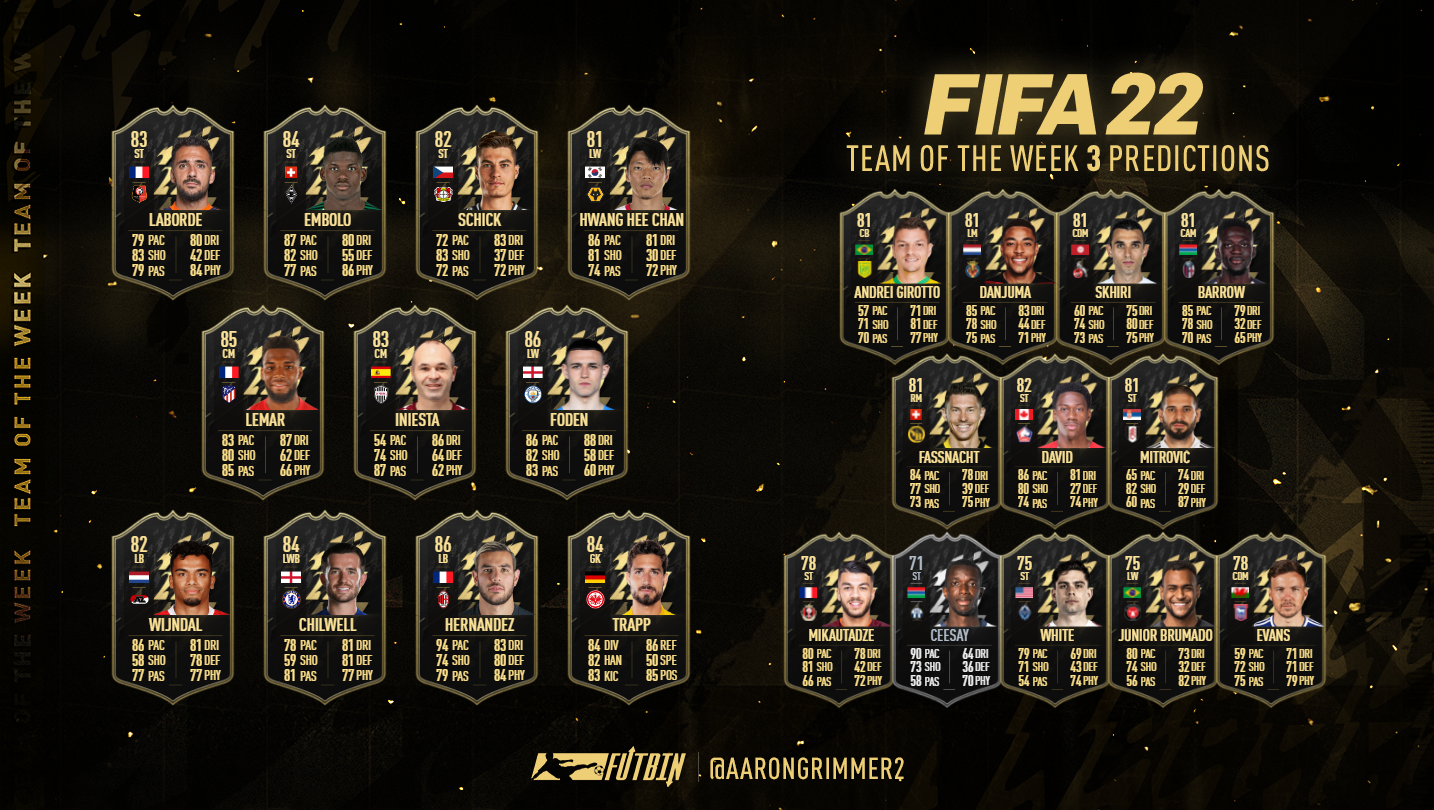 Kevin Trapp – GK - OVR 82>>84
Although it was Kostic who did the damage for Frankfurt allowing them to steal a 2-1 win from Bayern Munich it’s the other end of the field from which the IF is likely to occur. Had it not have been for the heroics of Kevin Trapp between the sticks we would be looking at an entirely different scoreline. With a total of ten, yes ten saves Trapp kept Frankfurt in the match. Kicker awarded the German a perfect match rating which as a keeper is always going to see you included by EA.

Owen Wijndal – LB - OVR 79>>82
Although we have only seen the player of the week awarded an IF so far from the Eredivisie with some pretty big exclusions already I am still willing to take the punt on Wijndal. Defenders were extremely difficult to predict this week and thus to have a gold option with a goal and an assist becomes nigh on impossible to ignore. AZ went on to win the match 3-1 with Wijndal picking up a respectable 7.5 match rating.

Ben Chilwell – LWB - OVR 82>>84
Chilwell has been forced out of the side by Alonso for large parts of the season but the Englishman showed exactly why there is competition for the spot this week, putting in a strong performance for Chelsea during their 3-1 win over Southampton. Tuchel will now have a tough decision on the LWB role after Chilwell's late goal topped off the performance and despite Alonso playing so well throughout the early parts of the season, I doubt either will be happy with a rotation role.

Theo Hernandez – LB - OVR 84>>86
Now this is one of the bigger punts you will see me take so I wouldn’t get too excited by it. Tonali was MOTM with an 8/10 however there are simply too many midfield options for him to be viable and thus we look at the next best thing with both Hernandez and Calabria getting a 7.5 for Milan. With a lack of obvious big-name candidates there is a chance that EA will opt for Hernandez to help hype up the side as currently there are very few options for them to do that with.

Hwang Hee Chan – LW - OVR 75>>81
Annoyingly Hwang Hee Chan never really kicked on at Leipzig while owning a OTW item. The South Korean has added a creative spark to the Wolverhampton side since joining in the summer though and having already put in a couple of impressive performances he looks set to be an important part of the Wolves side this campaign. With two goals against Newcastle this weekend Sky awarded him a 9/10 match rating, practically guaranteeing him an IF.

Thomas Lemar – CM - OVR 83>>85
As a LM option Lemar is often overlooked but with this potential IF being central it gives another option for your La Liga sides and one which is likely to be used for several hybrid options. With both a goal and an assist for Atletico during a 2-0 win over Barcelona it's an IF which seems very likely to occur. Suarez is the alternative option after also managing one goal and one assist but Lemar seems to be the more likely candidate of the two.

Andres Iniesta – CM - OVR 80>>83
Although when it comes to FIFA these days Iniesta is not the best IF going, he is still always welcomed by the community with him being one of the biggest legends still playing. The now 37-year-old midfielder is still playing his trade over in Japan for Vissel Kobe, of whom recorded a 5-1 home win this weekend with the Spaniard scoring twice and assisting another.

Phil Foden – LW - OVR 84>>86
Potentially the biggest game of the season in terms of seeing who the powerhouse in England is going to be ended in a 2-2 draw. Salah is perhaps the obvious IF choice with a goal and an assist but with the Egyptian randomly featuring in TOTW 1 it rules him out. Foden is the other option having also received a 9/10 match rating and with a lack of PL options that high match rating is likely to be enough to see him sneak in.

Gaetan Laborde – ST - OVR 80>>83
Rennes recorded the biggest upset of the weekend, ending PSG’s 100% record with a 2-0 win over them. There are a lot of potential IF’s from the match but with a lack of gold strikers and an abundance of gold midfielders I think the smart option is Laborde who scored and assisted to be awarded an 8/10 from L’equipe.

Breel Embolo – ST - OVR 77>>84
With both the Premier League and Serie A already having received a featured TOTW player I feel that they will try and rotate round the bigger divisions. Embolo looks set to be an easy choice if that is the case. Although the Swiss striker only managed one goal and one assist Kicker went on to award him a perfect 1 match rating and thus with the lack of striker options also considered he becomes an easy selection.

Patrik Schick – ST - OVR 79>>82
After his performances at the Euro’s this summer, Schick has become somewhat of a household name. Playing his trade for Leverkusen, he was one of the stand out performers in the division this weekend with two goals and an assist to his name during Leverkusen’s convincing 4-0 away win over Arminia.

Andrei Girotto – CB - OVR 75>>81
Ligue 1 was a difficult league to predict from outside of David with no a lot of options being available for selection. I feel as though a defensive slot will be filled from Ligue 1, as is often to case. Girotto looks to be a safe bet after making their TOTW for a goal and a clean sheet during Nantes 2-0 victory over Troyes.

Arnaut Danjuma – LM - OVR 76>>81
It is quite a step up from playing Championship football with Bournemouth but it is still the same calibre of performance from Danjuma, who is scoring the goals for Villarreal in La Liga now. A brace this weekend helped them to all three points, beating Real Betis 2-0

Ellyes Skhiri – CM - OVR 77>>81
Bundesliga was by far the division with the most options available with almost every match offering a strong candidate. Skhiri could even miss out but with two goals from midfield and a 1.5 to his name nine times out of ten he would be making the side and thus I simply must predict him to make the side. Koln went on to beat Furth 3-1 with Skhiri’s goals playing a huge role.

Musa Barrow – CAM - OVR 76>>81
Barrow looks to be a decent IF, especially if EA decide to award him the featured player. Bologna recorded an impressive 3-0 home win over Lazio, with Barrow scoring once and assisting another, he went on to be awarded MOTM with an 8/10 and thus is very likely to feature on Wednesday.

Christian Fassnacht – RM - OVR 75>>81
Fassnacht stood an outside chance of an IF last week for his two goals for Young Boys but went one better this week and bagged himself a hat trick. Despite there being a better performance in the division I would be surprised if either ended up missing out, especially with Fassnacht falling under the gold category. It looks as though both Young Boys and Basel will have a good battle for the title this season with the former looking to retain their title.

Jonathan David – ST - OVR 78>>82
Of those I decided to snub last week David was one of the most popular names to come across, it turned out that the snub was correct and thus he is able to make this week's side. The Canadian once again scored twice with the main difference being L’equipe awarded him an 8/10 rather than a 7. This should result in David walking into the side.

Aleksander Mitrovic – ST - OVR 75>>81
There were a fair few candidates from the ELL’s this week and although we are likely to be limited to only a few spots at a maximum with Mitrovic being a gold option it definitely puts him up the pecking order for selection. The Serbian took home the match ball after scoring all three of Fulham's goals during a 3-1 home win over Swansea on Wednesday evening.

Lee Evans – CDM - OVR 68>>78
The midweek fixtures were ver hit and miss last week with some very high-profile ones missing out while others were included. Seeing as though they were not ignored entirely, I am more than happy to keep including them for predictions though. Ipswich have had a rough start to the season after making 16 transfers over the summer with the side seemingly finding it difficult to gel. That wasn’t the case when playing fellow strugglers Doncaster however, with the tractor boys hitting six without reply. Lee Evans scored three of the six while also registering an assist from the CDM role making him one of the best performers of the week.

Junior Brumado – LW - OVR 65>>75
I could have easily included around 10 non gold options this week with so many high scoring teams and players but it’s the non-striker hat tricks that usually get preference and thus although Brumado’s NIF is a ST with the Brazilian playing LW he should get the nod over the ST options. The Danish division saw a lot of convincing results with Midtjylland’s 4-0 home win being one of them.

Assan Ceesay – ST - OVR 61>>71
After EA’s snubbing of several bronze items last week, it does indeed look as though they will cap the silver IF’s at one a week. This is probably going to be the easiest selection all year however after Ceesay destroyed Sion in Zurich’s 6-2 win over them. With five goal contributions for the Gambian, including four of his own goals there is no chance that he is missing out on this side.

Brian White – ST - OVR 65>>75
Although when it comes to FIFA the MLS is quite a dead league to play with in FUT with the US holding such a big player base now when a hat trick occurs in the division it’s rare that they miss out and thus Brian White should be the man getting the nod over alternate hat tricks scored, as seen with Kamara in TOTW 1. White scored all three Vancouver goals during their 3-0 win over San Jose.

Georges Mikautadze – ST - OVR 68>>78
The final addition of the week is of course also from a hat trick. Mikautadze, scored three of newly promoted Seraing’s five goals during their comfortable 5-1 win at home to Waregem. The Belgian Pro League very rarely sees more than one feature so despite it being Brugge against Anderlecht this weekend with the sides drawing 1-1 I would be surprised if the IF went anywhere else than Mikautadze. 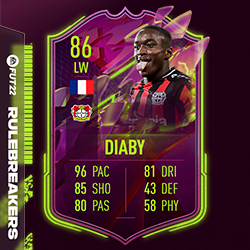