After a high-profile snub of headliners last week, the side was significantly worse than what it could have been and with TOTY just around the corner we are limited again. That being said TOTW 18 looks to be a respectable one with the likes of Ben Yedder, Immobile, Handanovic and a featured St Juste. Not to mention upgrades for both Laborde and Wilson’s headliner cards. 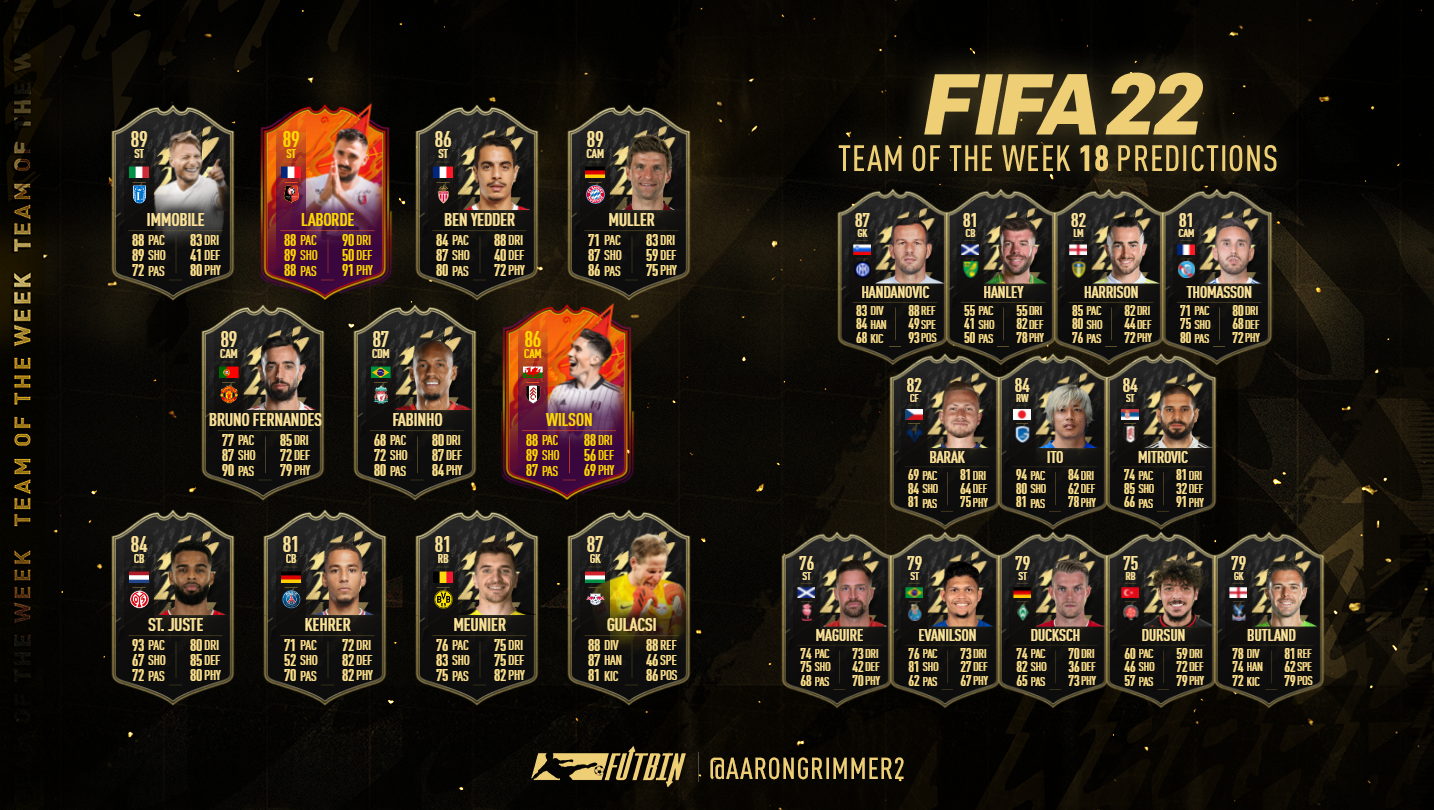 Peter Gulacsi – GK - OVR 85>>87
There were two simply phenomenal goalkeeping performances in the Bundesliga this weekend. Unfortunately for Sommer his two penalty saves and 12 saves in total is unlikely to be enough simply due to the fact they lost. That being said If EA were to make an exception Sommer is the man for it. Gulacsi’s performance is not to be overlooked either however with the Hungarian receiving a perfect 1 match rating after making a total of eight saves to keep his clean sheet during Leipzig’s 2-0 win away at Stuttgart.

Jeremiah St Juste – CB - OVR 76>>84
Although Zentner was named MOTM for Mainz this weekend I can’t see EA overlooking this opportunity, especially as Zentner was still only the third best keeper in the division while Juste is one of the best defensive options of the week. The pacey defender scored the only goal of the game as Mainz recorded a 1-0 win over Bochum and what's more is with the featured TOTW addition this year this card could be a nightmare to face.

Thilo Kehrer – CB - OVR 76>>81
It’s back to normality in Ligue 1 after a couple of tight campaigns in France PSG are back to their domination. A 2-0 home win over Brest this weekend sees them 11 points clear at the top of Ligue 1 after just 21 games. Kehrer has been on form recently and has been awarded a run in the side as a result. The German scored the second goal and helped keep their clean sheet intact.

Thomas Meunier – RB - OVR 77>>81
Ending the defensive trio, we have Meunier. The Belgian scored both the first and second goals for Dortmund before they went on to comfortably beat Freiburg 5-1. Dahoud is another strong contender with both a goal and an assist but it is beyond difficult to ignore a gold defender with multiple goal contributions and thus I have to opt for Meunier over Dahoud.

Thomas Muller – CAM - OVR 87>>89
Lewandowski under normal circumstances would be walking into TOTW 18 after scoring a hat trick for Munich. It is highly likely that the Polish striker will feature in TOTY though and thus meaning that he can’t be in the upcoming TOTW. We then look for the next best option and that is Muller who alongside Lewan picked up a perfect 1 from Kicker. With two assists to his name the German is set for his second IF of the game.

Harry Wilson – RM - OVR 75>>84
We saw all of the headliner options snubbed last week which personally doesn’t make sense for the first team for me but it happened. Now that no headliner options are in packs surely EA will take the time to increase, when possible, on one of the best promotions of the year. Wilson is in line for his first upgrade after scoring twice and assisting another two during Fulham’s 7-0 demolition of Reading.

Bruno Fernandes – CAM - OVR 88>>89
Leading by two goals it looked as though United were going to cruise to victory over Villa but a late fightback saw the points shared after a Coutinho debut goal. I still feel as though Fernandes has done enough to get the nod though after scoring both the red devils goals. Jacob Ramsey is also a shout however with him being silver it significantly reduces his chances.

Fabinho – CDM - OVR 86>>87
Pre-season a 3-0 win over Brentford for Liverpool wouldn’t sound like anything special however with the Bees performing well so far this season it’s a strong result. Although Manchester City are now running away with the Premiership these are the results that Liverpool need to grind out to have any hope of catching. Fabinho was named MOTM after he scored once and was solid throughout. The Fabinho type of player usually gets awarded with an IF when this type of performance occurs.

Ciro Immobile – ST - OVR 87>>89
Although there are players, I have ignored this week due to TOTY chances with both Lewandowski and KDB expected to feature, I am confident that Immobile won't be close to it and thus can be included in TOTW. The Italian scored twice for Lazio in a 3-0 win over Salernitana and was awarded MOTM with a 7.5 match rating from Gazzeta

Wissam Ben Yedder – ST - OVR 84>>86
With the Icardi SBC released this week what better time for an IF Ben Yedder. With the signature signings card at over 500k a cheaper option is thankfully just around the corner. Monaco recorded a 4-0 win over Clermont with Ben Yedder being heavily involved, scoring twice and assisting another. The Frenchman was awarded player of the week in France with an 8/10 match rating.

Gaetan Laborde – ST - OVR 80>>86
With Rennes winning by the comfortable score line of 6-0 this weekend it is inevitable that we will see someone from the French outlet feature in TOTW 18. There were numerous but none specifically stood out. Only two made it into L’equipe’s TOTW and from that Laborde seems to be the obvious shout with both a goal and an assist to his name. With the added benefit of a headliner card, I think that Laborde should clinch the IF.

Samir Handanovic – GK - OVR 86>>87
Handanovic really should have received an IF by now but a couple of snubs from EA already mean this will be his first should it happen. The Slovenian was crucial for Inter during their 0-0 draw with Atalanta, making a total of six saves to keep the scores level. Gazzetta awarded him MOTM with a 7.5 and although it’s rare to see two high rated keepers in one side they both deserve to be there this week.

Grant Hanley – CB - OVR 75>>81
Pressure continues to build on Rafa Benitez with players showing their frustrations with the Spaniard and a shock 2-1 loss to Norwich could be the final blow for him. Hanley was named MOTM with a huge 9/10 match rating after putting in a strong defensive performance for the canaries who are now up to 18th after their three points.

Jack Harrison – LM - OVR 78>>82
Not many had predicted a Leeds win when coming up against the inform West Ham but Jack Harrison’s hat trick helped guide them to a 3-2 win during the enthralling matchup. West Ham are now in danger of dropping out of the top four while Leeds continues to look less likely for the drop.

Adrien Thomasson – CAM - OVR 76>>81
The fourth and final selection from Ligue 1 this week goes the way of Thomasson. Strasbourg came away with a 3-1 win at home to Montpellier with Thomasson recording both a goal and an assist to ensure they came away with all three points, ending Montpelier's winning streak in the process.

Junya Ito – RW - OVR 77>>84
There was a serious lack of wingers available for selection this week which is likely to work in favour of Ito. He is often a fringe player which then gets snubbed due to his league but with this being his SIF he is becoming a very usable card in FIFA and his inevitable TOTS will be very strong indeed. He gets in this week for both a goal and an assist during Genk’s 4-1 home win over Beerschot.

Antonin Barak – CF - OVR 78>>82
The position of Barak was the only debateable factor in this selection but with Caprari being included only a couple of weeks ago it’s obvious as to what EA will class it as and that’s a CF. Barak scored three times for Verona as they recorded an impressive 4-2 away win over Sassuolo. Frustratingly this was the difficult game for Simeone’s headliner card but a disappointing result last week means an upgrade is unlikely to occur for four consecutive wins now. A Barak IF however, is inevitable.

Aleksandar Mitrovic – ST - OVR 75>>84
Despite being just 25 games into a 46-game season Mitrovic is now only four goals away from scoring the most goals in one season in the Championship. A ridiculous statistic. The Serbian is now on 27 goals for this season after scoring twice midweek and then three times this weekend. Should he continue his form he could even hit the 50-goal mark. A second Fulham IF could be pushing it but with them coming from separate games, I see no reason as to why it can’t happen.

Jack Butland – GK - OVR 73>>79
It has been a long time since the rise of Jack Butland, who now regularly sits on the Palace bench. He got a chance this weekend though and it is one he took well. Although he conceded if it wasn’t for him Palace would have lost instead of coming away with a 1-1 draw. In total the English stopper made four saves alongside a penalty save to claim MOTM with an 8/10.

Salih Dursun – RB - OVR 65>>75
Moving onto one of the worst IF’s I have seen in a while, not even an exaggeration, Afterall who doesn’t want a 60-pace wingback. Dursun deserves a spot in the side though and thankfully for him these sides are not based solely on who would be the best FIFA card. Dursun picked up both a goal and an assist from RB as Karagumruk recorded a 2-0 win over Rizespor.

Marvin Ducksch – ST - OVR 73>>79
The reserves section has been very difficult to predict for a few weeks now. There were a couple of easy selections this week but aside from that it was ridiculously difficult to select and practically pot luck. I have opted for Ducksch one goal and two assists simply after receiving Bundesliga 2’s POTW with a 1.5 match rating but honestly this could be anyone.

Evanilson – ST - OVR 73>>79
There are two strong candidates from Porto this week and honestly it could go either way. The majority of the time it will go the way of the hat trick however and thus that is the route I have opted for. Porto came away with a 4-1 win against Belenenses with Evanilson scoring three while Fabio Viera assisted the same amount.

Chris Maguire – ST - OVR 67>>76
Lincoln provided a hammer blow to title contenders Sunderland with a shock 3-1 away win on Tuesday. Maguire scored all three of those goals, helping to put some well needed breathing room between the Imps and the relegation zone.