Late in the game, but never too late to be learning some new tricks of the trade.  For the past few weeks I have been trying to do just that and to be honest it has certainly brought some extra enjoyment back into the game.  I think it has to do with patterns of play… you get stuck in a loop of, “oh that is how I always concede”... and even your own goals can start to feel more robotic as you work the ball into similar spaces.  Truth be told, I have accidentally moved my tactics back to the 4-2-2-2 in a few matches and immediately wonder why my build up seems slower with fewer options, only to realize that Dalglish is playing RM (or RAM in this case) and quickly switching one over to the new 3-5-2.  I am definitely buying what people are selling about this formation and have returned to more stable win numbers and have the feeling that another 16-4 (which would be the first time in well over a month) is just around the corner.  With that, let's take a look at what has been so successful and what traps to watch out for.

Options.  This formation presents you with a plethora of options in both the Attacking and Defensive thirds of the pitch.  In Attack, I always feel like there is an extra pass to play and remove the effectiveness of my opponents' press and/or challenges flying in.  The triangles around the pitch are evident and it always feels like you have at least a 3v2 advantage when trying to knock the ball around into space.  The double striker remains key in this FIFA in my opinion and in this case, a dedicated CAM in behind them adds that extra potency in attack.  The same can be said in Defense which is what ultimately makes this formation so impressive.  I feel like I can always be aggressive with my controlled player because if I should miss a tackle there is always cover.  In the 4-2-2-2 I often felt that challenges were do or die and I was always one phased or missed tackle away from conceding.  This is not the case in the 3-5-2 where the extra CB is always readily available to step in or intercept would be chances. 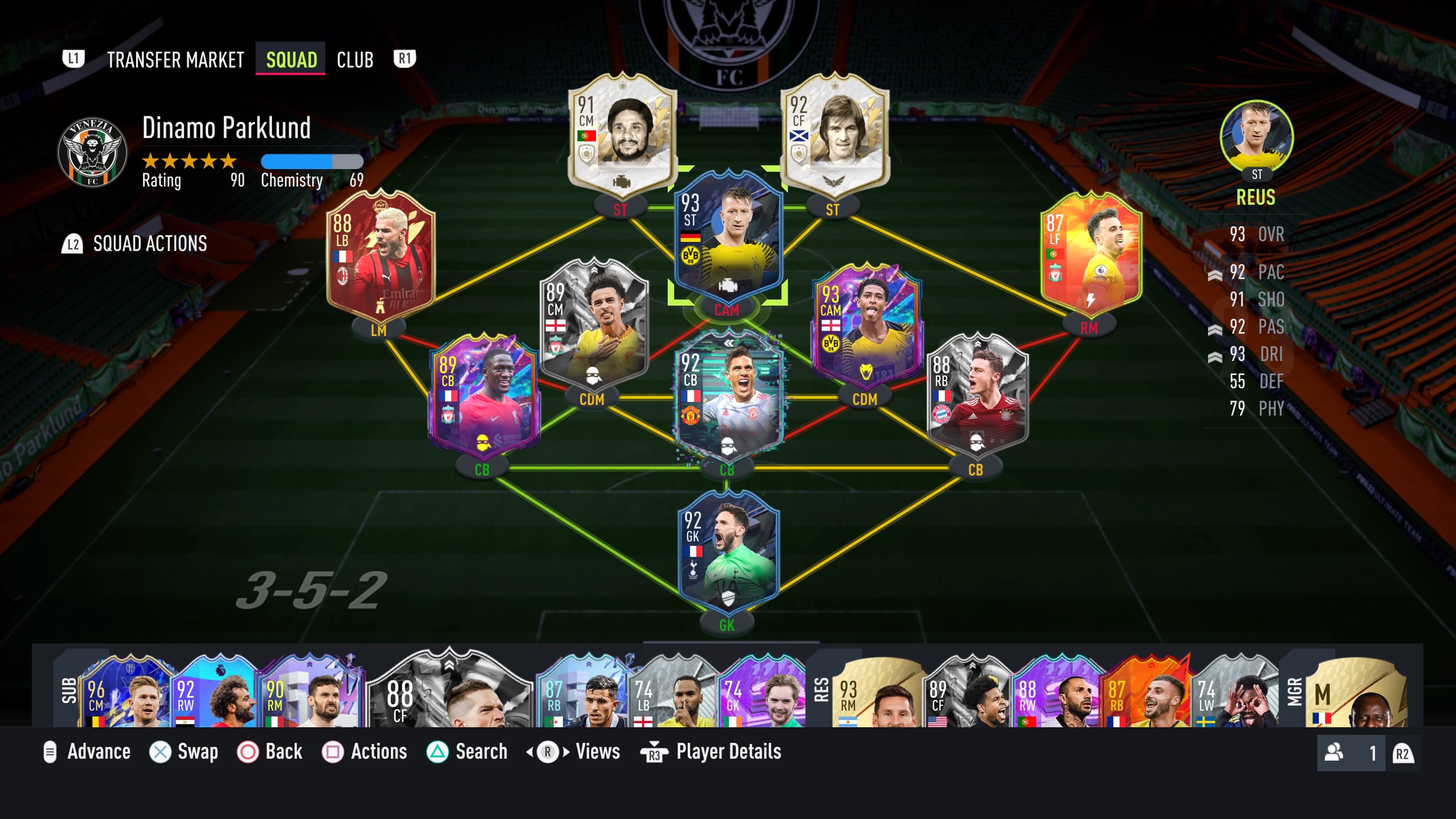 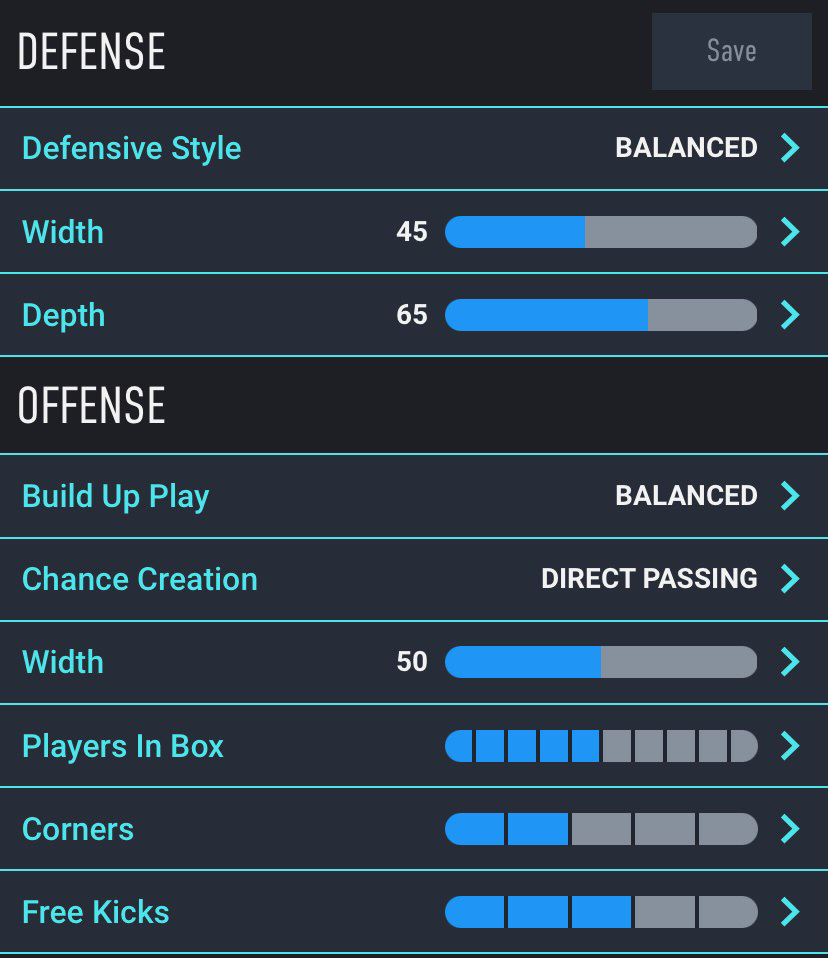 On the pitch, this play style always seems a bit helter skelter to me, but in a good way.  There is always a lot going on and this is where all of the options come from in the different phases of play.  The biggest advantage is always in the box where that extra pass to the additional striker or late arriving CAM means that I have avoided more auto blocks this month than I would have previously thought possible.  Yes, it does take away from some of the bangers or individual brilliance needed to score, but the frequency of chances to goals has certainly improved under the 3-5-2.  Defensively is where the flexibility lies though.  For me, I like to be hyper aggressive and run my players toward attackers and try to win the ball early.  However, the presence of the three CBs also lends itself to a Stay Back style if that suits your fancy.

The 4-2-2-2 is a huge favorite of mine due to the width and the need to exploit that space in FIFA 22.  The LAM & RAM would also get into the box and this created those overloads but not consistently enough.  I am loving the 3-5-2 because I do not have to sacrifice that width, while the central CAM and even the one CDM will end up in the box creating the same overload and more frequently than the 4-2-2-2.

The extra CB is again the key here to be able to compete with 60 Depth in a very heavily focused over the top meta.  Since I have been playing Pavard and/or Theo Hernandez (Konate this weekend) there is still the pace to cover those potent through balls while still allowing the other two CB to apply immediate pressure.  I love the squeeze that you can put on teams when you are applying pressure in their half… while at the same time the Balanced Style makes sure that you are not gambling with your defensive cover.

CB: → Stay Back Attacking - Normal Int. - Stick to Position
* Note: Having the two CB with the most pace on the outside allows them to help cover.  The best auto-block/interceptor of the ball in the middle.
GK: Come Crosses - Balanced

So far these tactics have been doing the business for me and I am really enjoying tinkering with the various options.  I have tried the CDMs on Cover Center and in a weird way, I found that they went missing.  When the CDMs are allowed to their own devices they will often make the best choices based on the given situation.  Additionally, I have tried the STs with Get In Behind and found that those same options that I was raving about at the start of the review started to limit themselves.  In the end, the more I tinker, the more I think this formation is just about perfect with minimal customization.  Let me know if you give these a run out this weekend, or maybe you have slight changes you are liking… regardless I hope you find them as enjoyable and as effective as I have this past month.  Hoping you are safe and well.  Cheers for reading.