This guy is simply amazing, I play him at ST in a 433(4) formation. The 79 pace (specially the 74 sprint speed) might put most off this card, but with a hunter chem style I honestly can say he felt as fast as players like 87 icon Hernandez. His shooting is incredible, I dare say he is at the level of prime icon Van Basten, he just finishes everything with either foot thanks to a 4 star weak foot that felt like a 5 star and composure that never was an issue. Distance shooting is fantastic and long range finesse shots, although the weakest aspect of his shooting, are also great. Dribbling is also one of his best attributes,it's really exceptional and probably one of the reasons why he feels so fast, I would compare his dribbling to that of 86 SBC Quincy Promes or probably better than that. If you don't feel like using him at ST, he could probably do a very good job at CAM as he has a pretty decent pass on him, though I'd personally rather use other bundesliga options in that position. Physically he's no slouch either, good stamina and strength which will be enough for most scenarios (don't expect to bully someone like boateng of course), however his jumping is not exceptional and since he isn't super tall his heading isn't a very good attribute. The 4 star skills are also a big positive, it really helps to find space for a shot, run or pass.

The thing is that every player has a different play style. I personally use my CAM and wingers heavily on all attacks and thus it's very important that the striker is able to pass, turn and find space, all things that Kramaric does really well. I think that as a solo striker he works really well if you have a similar play style, but if you depend heavily on crosses or solely on your ST to phisically break the defensive line he might not be the best option, you'd probably want someone stronger and taller. I haven't tried him in a 2 striker formation but I can imagine him being fantastic beside someone like Lewandowski, Aubameyang or IF Batshuayi, as they would provide the raw power while Kramaric provides the more technical aspect of play.

In conclusion, I highly recommend this card, at 30k (what I paid and saw him going for whilst writing this) you can't go wrong. Worst case scenario, you don't like him and sell him off for either a tax loss or even profit as I can't see him going down in price more. For me, he is game changer, comes in clutch so many times scoring from angles that you would never expect from runs that don't seem right when you remember that he only has 79 pace. He's just one of those players that performs fantastically and above any expectation.

Can be hard to link 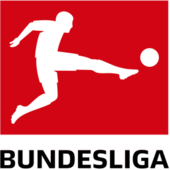 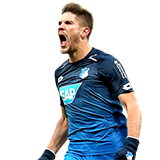 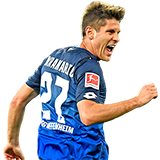 I wrote a review on 86 kramaric a couple weeks before this one came out, but i've gone through an experimental period after making 320k profit by packing TOTS KDB in a shitty squad battles reward pack so i've only tried 87 kramaric yesterday for 4 games.i picked him up for 25.5k (the market is well dead) and i slapped engine on him this time, because his shot is already insane.of course, he's a mach...
Read full review

Sick card. I had an engine card spare in my club so I intended to give it to him but the cheapest cf/cam card I found already had hunter so I rolled with it and i have to say that I’m satisfied. He’s playing behind beast himself the target man 87 batsman and the nimble 82 gnabry and he synergizes very well with them. His workrates fit my playstyle as he’s always near the ball, he’s always there to receive the...
Read full review 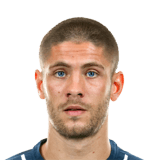