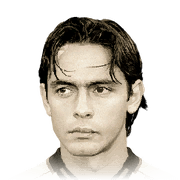 Had around 400k for a striker icon instead of Kane, had a look at his stats and decided to give him a try. I don't regret it one bit. At time of writing he has 21 goals in 11 games, between FUT Champs and Legendary Squad Battles, with a finisher chemistry. He can score the most amazing goals from almost any angle, inside the box, outside, as well as headers from corners. His positioning is impeccable, and most times can take a shot directly from a good pass. He unfortunately also tends to hit the post alot.

Passing is abit weak, but not worse than say immobile or Mandzukic IF. Although he has a 3 star weak foot, still scores good goals on his left foot, even outside the box. 3 star skills might be an issue if that's you style, but if like me you don't use that much, then this card is amazing.

Stamina is nothing special, but with Medium/Low work rates he can still survive and be effective all 120 minutes.

he is one of the most-efficient, nice and rapid positioning, clinical finishing at this price level, and also surprisingly with header ability

but just like the reality, dont use him to make tricky passing, thats not he specialty

not the top speed type of striker

can only do simple ground pass