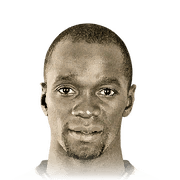 One of the best CDM's in FIFA 19. He covers the back really well. His passing, interceptions, marking and tackling are exceptional. I use him in a 4231 formation along with kante and i have never seen my back line looking more strong than this. His movement is always the right one towards the ball and the player he is marking. Most people compare him with Kane and IRL thats just a joke. Kante is good but Makélélé was a god! But we are talking about FIFA here and in game they are very similar apart from headers. Makélélé is taller and he can win you a fair amount of headers. Don't expect him to win a header from Kane, Manzukic or CR7 becasue he wont. Other than that he feels like a 90 rated CDM and i am happy to own the card.

The only stat i do not like is his shooting. It is terrible! Although you have the option to avoid shooting with him as he can pass the ball amazingly to a good shooter.

Makelele is a very consistent player he defends and makes great interceptions and is very aggressive on winning the ball back.

His passing is good for a CDM, this passing is well needed because a CDM's role is to win the ball and start a counter attack.

Sadly I haven't tried Kante yet to compare them. Makelele's postition is off sometimes marking the wing or attacking with the team breaking his role even with the low/high workrates

I got Makelele's untradable I was choosing between rio and him I chose Makelele purely because he was a Chelsea player...

At the end I don't really regret getting Makelele...

Wins headers in the midfield

An absolute beast at CDM. He is definetely worth the money. He is very good at tackeling and can build up your attack from behind. Really good passing even when he is under pressure.

strong in the air, even he's not the tallest player

shooting - but never just 50. I scored some good goals with him