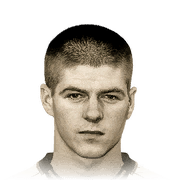 his defending is very very good his work rate ( High/High) will help you to control the game .

I have a pretty stacked team and I didn't think 89 Gerrard would make a huge difference after having used his baby card a while, which didn't impress me. I just wanted to try him out anyway because I felt like I missed a CAM with good shooting. I liked this Gerrard, he had really nice passing and was much stronger than I expected him to be, he kept defenders of the ball while setting up an attack. So I thought I might give him a chance at ST, and damn, that changed my game. His longshots are really nice, he's a real finisher. He doesn't score every game, but when he scores it are always really nice goals.

But for me where he really shines is the creation of chances. I partner him with FB Ibra at ST and Hazard at CAM and often it's Gerrard that creates chances with his great passing and positioning, feeding assits to Ibra.

Something else I really enjoyed about the card is that his corners are really good. I noticed the amount of goals from corners went up when I assigned the task to him. This is something I haven't experienced since TOTY KDB last year.

Last but not least: stamina. I don't get why because 87 isn't much more than the rest of my team, and his workrates should make him tired faster, but he's the one that lasts the longest in my current team.

This is for sure the best Icon under or around 1m I have tried.

Strength on the ball

Wow this card is everything you wish for in an Icon. Gerrard 89 version is a vast upgrade to his 86 in terms of a META player. This card can compete with the best midfielders in the game and this is not an exaggeration. If you have the coins available do not think twice in buying have a look at my video review which goes into depth.