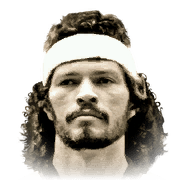 I’ve sold my whole team to buy an icon, first I’ve bought 90 Stoichkov but I didn’t liked him. So a bought a new icon; Socrates and I don’t regret buying him. He is absolutely amazing , especially his shot. His shot power is 90 but it feels like it’s 99. Every chance he scored! His 5star weak foot is amazing too and you can score from every corner with his chocolate leg. And he has 4 star skills so you can use almost every skillmove that is in the game.

It doesn’t feel like he has 56 balance so it doesn’t matter. And the 64 jumping isn’t a big problem either. Although Socrates has high strength stats, he can easily be put off from the ball and this is the only con he has for me.

An great advantage of Socrates is that he is Brazilian , so he can have a stronglink to Alex Sandro for example  .Unfortunately you cant’ see the bandana in-game.

My favorite icon in the game, the best cost benefit ratio, so reliable, strong, great passer, good dribbler, deadly finisher, great headers, he's just complete. Use him as a cam and Hunter chem style was a must for me. Sold him Tuesday expecting the icon crash due to moment icons, and I'm going to buy a new two mill team. But I feel like I'm going to end up going back to him

Really worth the coins;

Reliable, will carry you when you need him;

5 star makes him a nightmare to defend against

Needed Hunter for me

First thing first, i choose Socrates to play as a CAM on my squad because i love Brazil and i love a tall and strong typical of CAM. For a long term use (around 3 months), i gotta say that Socrates is beast! but not the best!

His main pro is "Passing", he can pass the ball so accurate! (short pass, long pass, through pass, etc).

His second pro is "Shooting" he is also clinical finisher! his right/left foot are all amazing and his long shot is out of the world!

His third pro is his "Physical" he is tall and strong, he can win header many times, he can even defend the corner because of his height. Also he has a very good stamina for a cam (85)

His fourth pro is his "Pace" as a CAM and for a big guy like him, his pace is quite good enough.

But, his main negative is his "balance" that can make me mad so many times! really!

So, i can tell that his negatives are :

his dribbling and his defending

Medium/Low workrates makes him too lazy to help his team while defend. His tackle also not really good. (because he is a CAM, not a CM)

Yeah, okay, the conclusion is :

He is one of the best CAM i ever use in FIFA (previous : KDB, Firmino, Ibrahimovic, Arnautovic, Ronaldinho, Rui Costa, Okocha, and so on)

if you are the typical player that like to have a tall and strong CAM, more passing than dribbling, Socrates is suits for you!