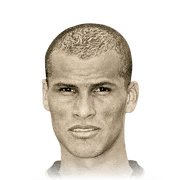 Great player, clinical shots, jaw dropping long passes. But I had some issues that made me sell him: First his WF limits him a lot, also there's something in the way he turns that makes him lose the ball pretty easily sometimes. Third, his price, bought him for 795 k sold for 820k and he never felt worth it. Even with 29 G 7 Ass in 36 games. The nail in the coffin was a rivals game where I put him on the bench for talisca 82 n was matched with a decent opponent, but the team felt the same if not better. Tested a few more games and sadly, sold him for prime Vieri. Rivaldo is a Great player but worth ~550k

This guy is incredible. I rarely write reviews but I had to. I was very hesitant before I bought him because of the weak foot but wow I am glad I did get him. Incredible passing, incredible left foot and always in the right place.

I played him in WL towards the end and he bailed me. Scored in every game i played him and always had an assist.

Feels agile and turns easily, not the fastest but very technical and can hold the ball.

Weak foot -but if you do learn to avoid shooting with the right foot, you have one of the best cards.

so i packed this guy in the baby icon sbc and i didnt really know what to make of it at the time, then i made the realisation that he is rather tall at 6'1 and left footed. so i decided to try him with a hawk chemistry style in left CAM in 4231 narrow and i think it might be one of the best decisions that i have ever made while playing this game. i never thought i would really write a review on here but Rivaldo has been so amazing for me in the weekend league recently that i thought that i jsut ahd to write one about him.

if you look past the 2 star weak foot then this card with a hawk chemistry style will do absolute wonders for you in left CAM. of course after the baby icon sbc was released i noticed the price of this card was starting to drop drastically, making this card all the more better and valuable for your coins.

just make sure he is in a wide CAM role for you to get the best out of this card; that being back post headers. he is also very strong with the help of physical boosting chemistry styles

Pace and agility considering his height