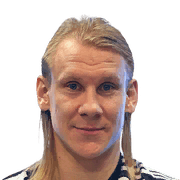 Before the World Cup this summer I have always criticized Domagoj Vida. I've always thought that he is somewhat of a meme but he really proved me wrong during the WC. So, when I was building an NLW-squad for FIFA, he just suddenly appeared as a light-haired angel from above as I was looking for someone to place next to Pepe in the central defense.

He does lack some base strength so I didn't have any expectations but damn, he proved me so wrong. I did slap a "Sentinel" chemistry style on him which upgraded his strength to 87. Combined with his great speed, he now became a complete monster. Wherever your opponent tries to attack, you can be sure that Vida isn't far away, just waiting for the right moment to make a tackle or an interception.

He is so good on following his opponent in 1-on-1's and often wins them aswell. I use five squads that I rotate among and he is by far the best performing central defender out of all squads. Apart from all this, he also has good workrates with M/H so he doesn't go on any fieldtrips in the offense that he shouldn't.

This is my first review ever on here and it's all because of this beast, I just felt I had to share the joy of playing with him.

Great tackles, both standing and sliding

Height/Jumping, He is 6'0, it wouldn't hurt him if he was a little taller.