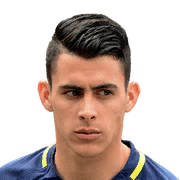 Got this card a while ago but I took a risk as there was no reviews anywhere for him. Thankfully, that risk paid off, big time, but with the new Tevez SBC, I felt I should be the first to review this wicked card as it is now much easier to get him into a team.

*Only played in Weekend League, don't touch Division Rivals (I'm DIV 3 and Gold 1/Elite 3 if you want a reference point for my ability and general use of this card)*

Used as a RAM/RW in a few teams I've had, all have been with the 4-2-3-1 in -game. The team linked was used for about 200 games, and I packed untradeable CR7 from Division Rivals rank 3 rewards about 100 games in. That was the team I used Pavon most in so I've put it there (He's in a team with Tevez now), I would get Gold 1 with that team, rarely Elite 3.

Playing balls in behind for Pavon is incredibly effective, his pace means he's able to dart onto most passes and his stamina means he can do it all game, especially around tired players he remains just as effective, if not more.

His shooting is brilliant, excellent finishing, even his one-on-ones are good, and his 3* weak foot has never bothered me (I will add to this in the weaknesses). But even still, it's his power shots that stand out, especially his trademark finish, involving driving into the box down the right and using about 3 bars of power to find the top left corner almost every time. I would say this one of the most effective plays you can do with a non-mega team player. however I do not abuse finesse shot so I wouldn't try them unless you plan on playing him on the left, in which case I can only imagine he'd be OP af, but please don't do that.

Another hidden feature of this guy is his passing, specifically his crossing and low driven balls. The amount of times he picked out Douglas Costa, OTW Felipe Anderson or IF Musa with a ball round the back of the defence to round off another explosive counter-attack is incredible. I think if crosses weren't so favoured towards high rated GKs, this guy would be one of the best and whipping balls into the box.

I've already raved about his stamina, but I should add he's also incredible at hunting down players and winning the ball back because of this, and another nice little positive to this guy is his free kicks, which are also of a very high standard.

On a negative view, I would say his left footed finesse are probably not effective due to his 3* weakfoot, however this does not impact my play style as I am not a (Finesse shot abusing scumbag). However, I can only imagine they are super effective if you played him on the left, but please do not do that.

Overall, I would 100% recommend this card, especially if you're looking to fit the new Tevez into a team. He's my go to RW now and is obviously brilliant off the bench.

Stamina - 98 stamina is very, very noticeable and works a charm with his pace

Crossing - Brilliant at finding the final ball on a counter-attack

He is just perfect his 3* duo may piss u off at times but trust me with a sniper his skill moves isn't even needed especially since he is a "dribbler", the 3 star weak foot isn't really that bad coz positions where you want him to use his weaker foot his uses is strong on and still scores

This guy is insane. I have used him on ram in 4231 and linked with tevez flashback sbc. All his stats are insane for winger or attacking mid. i have also used him at the striker but it was not as good as i expected. You can use him like a sub or in the starting 11 with stamina 98. He is very short and because of that he's dribbling and pace becomes more insane. Also i have Lucas Moura potm, but christian is better than him in most stats like passing and i think dribbling but lucas dribbles amazing to. also this card is not perfect, the main minus are skills, wf 3 stars, not really good defending help and bad heading accuracy. Also it is not hard at all to link him because of his popular nation, and if you've done flashback tevez or abs zarate he doesn't need no more links and you can make amazing hybrid without icons. If you want to use him at the wing use deadeye(passing and shooting booster) and if you want him as a cam, cf or even cm use maestro(shooting passing and dribbling) if you want use him as a striker please DON'T DO IT HE HAS 77 FINISHING(if you really want it use sniper or finisher)