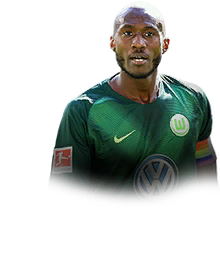 Joshua Guilavougi is the first player I will be reviewing! I Was looking to upgrade my team and I found that I needed a good French Cdm to play alongside my Fernandinho and I wanted a change from Kondogbia because his H/M work rates were making him go up the pitch and opening up a hole in the defense so then I realized that Guilavougi that was in the FUT Swap and I had sufficient FUT Swap players to trade in and I'm so glad I did trade these cards in...This card has been a wall for my team scoring almost every header he gets onto and being a menace in the defense bullying the META cards that come his way. He also has a better card then the most used player in FIFA 19 Fabiniho and Is almost free!!! IM so glad I've had the chance to get this card and he will be in the team for hopefully a very long time

Pace: Although for a cdm he isn't kante fast he for FIFA 19 is fast enough for the game as it is I've used a shadow on him and he is quick enough to catch up to some of the fastest players in the game 9/10

Shooting: Not really important for a cdm but most of his goals come from corners or free kicks I have scored a couple of bangers from outside the box and his timed finesse shots aren't all bad 8/10

Dribbling: Again not very important for a cdm but good enough not going to say much here 9/10

Defending: As stated earlier I've put a shadow on him and this makes his defending stats AMAZING he gets to every ball 10/10

So… I decided to write this review to procrastinate from studying for my exams, but that does not take away the fact what a game-changer this guy has been for me! You might ask, why do you play him at CB? Well, I was going 1-4 in FUT CHAMPS, which was my worst start this year. I was playing with Thiago Silva and UCL Kimpembe as CB’s, when Kimpembe got a red card I decided to give this guy a try at CB (already being a solid as a CDM.) You might not believe this, but I won the next 9 out of 10 games, which was the start of something great. I finished that WL in Gold 2, as I was not able to finish all my games. The thing that makes this card irreplaceable is that his passing is incredibly useful to start your attack, something that I had difficulties with Kimpembe. He is tall and strong, wins every header, and is relatively pacey as well. Please give him a try at CB, you won’t regret it!

Also, I know that I play him at 5 chem, which surprises me the most – that he is extremely good for a non full-chem player. So I assume that if he does play at full chem (8, being a CDM) he will be more incredible.

Strong, Pacey, Good Passing, Wins every header, Decent ball control, Good player to build up an attack from the back, All the goals I scored with him were from corners

Does indeed miss chances inside the box, however he does not get much of those through an entire FUT Champs journey