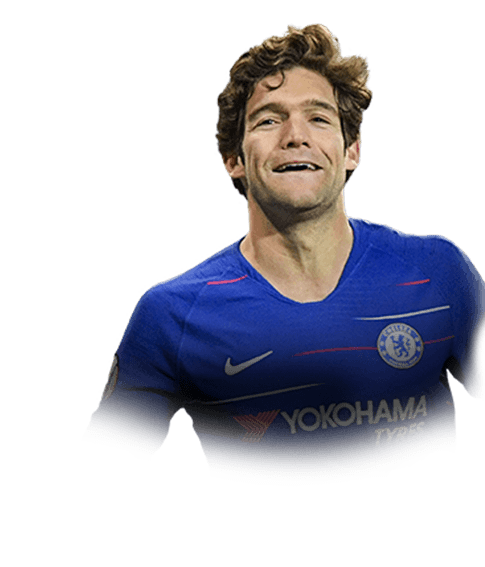 I decided to complete the SBC for the UEL Road to the Final version of Marcos Alonso having used his IF card on Fifa 18. I wasn't expecting to get such an attacking force as this card though. He is a great LB or LWB marauding down the left hand side and, with the catalyst them style, his crossing is 99 rated. This has given me real options and most of his crosses seem to find the head of my strikers or CAM pushing forward in to the box.

The only player of the same style I can compare him to is FIFA 18 World Cup Winner Benjamin Mendy card. Every cross feels dangerous.

Hi guys! Well,to being totally honest, at the beginning when this SBC was out I only did it because they offered a pack of 100k in exchange, in addition to having the expectation that chelsea advance in the UEL and could use it in the future. But after playing 70 games with his card I can definitely say that he is the best left back in the game. Im always using him as a LB obviously, But sometimes as a LM in my fully ofensive formation with a 3-4-2-1.

Using him with anchor, the defending stats are impresive for a 84 card. But its ingame when the things changes, He is always well positioned, he always seems to win those 50/50 battles, He always appear to save you in corners were the other player puts lots of towers in the box. And with his 91 energy and his H/H work rate, you can see him running from box to box until the end of the game. Put him together with speeders CB like Davinson Sanchez and Azpilicueta, and you'll make sure you have an impenetrable wall in your defense.

In offensive terms, it's where I was really surprised, In fact I could say that its the best thing about this card. On one hand, his jumping and heading are excellent, in my case using it in 70 matches between WK and Rivals I scored 28 goals, of which 16 were headers in corners, always sending the ball to the penalty spot, i mean no strange move in there. Another incredible part of this card its his 89 FK Accuracy and his magic left foot, they are a thing of another world. With him I managed to get 9 FK goals at different distances, with strong or finesse shot, always in the net or saved by the gk.

Also in terms of offensive, most of his crosses seem to find the head of my strikers or CAM pushing forward in to the box.

Finally, All i have to say is: Hands down Marcos Alonso UEL LIVE is the best LB that I have used so far in FIFA 19! And all of you who have him there wainting to upgrade, I 100% recomend you to start using him right now. Comparing this card with others of the best LB in game ( Alex sandro, Telles, robertson, marcelo...) others may be more effective just in defending tems, like Telles UCL LIVE card, Or just in a offensive way like Marcelo. But overall, This card is amazing, Perfect when you want a good LB to be as good as posible at defending and to have an ace up one's sleeve when you have him into an ataccking situation.

Marcos Alonso is a great LB for those who don't want to use normal Mendy (81? Seriously?) or IF Robbo (he is practically a leaf) but want to build a BPL team. His card will definately get a boost due to Chelsea's great performances in Europa League. I completed SBC for 50k and decided to put him into my first team. Maybe first games weren't perfect but he did fine. When he got an upgrade everything had changed. His 87 rated card is absolute beast! Just look at those crosses and stamina. Maybe he didn't get many assissts in my team (I use him as Stay back defender) but his pace with Shadow is great. He also scored a few times from corners coz he is 6'2". I love this card so bad!