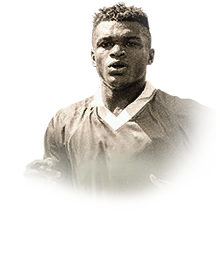 After me conceding loss after loss last weekend league, I decided I wanted to strengthen my defense. I had been waiting for Prime Icon Gerrard since early January, but EA seem to have chosen to fuck with me and keep me waiting for ages. So I decided to stop sitting on my coins and untradables and to do an moments icon SBC.

Having Keane in the midfield and because I'm shit at defending this year, I chose to invest in a proper centreback. My eye fell on Desailly from the first moment and I was sold. Did the SBC, put all my dearly beloved Gerrard savings in it, and got a fucking 84 rated Sokratis as the highest pull out of my packs. So yeah, If you hope for something in return. Don't.

I slipped Desailly right in and he just felt like I had been playing with him for ages.

He was present from the first game. Making very solid interceptions. He just feels even better than I expected. I thought he would feel big, strong but a bit clumsy and fat. Like Campbell. But instead he feels real rapid, fast, agile on the ball. He isn't fat at all. He skinny af.

He's everywhere on the pitch. He out-muscles a fucking Ibra with ease. He out-muscles everyone and he jumps like a cat on a laser's dot. He has been almost unpassable and made almost no error. If you see him coming in on a corner just give it to him he will tower above everybody and put the ball in the net. He is solid as a rock.

So yeah, he is expensive. But it feels like playing a Ferrari in defense. A Ferrari that is solid and strong. Like a Ferrari fucked a hummer and put hydraulics on it to make it jump a mile in the fucking sky. That's how I would describe Desailly as a car.

If have been in doubt about getting Desailly, I would advise you to just to do it. The man is insane. He is quick, he's black, he's solid at the back. It's Desaillyyyyyyyyyyyy.

so I completed this sbc for about 530k (with untreadables) and I will tell you that he is worth it. He is one of the best CB in the game and he is totally worth the price, also helping me to a personal best in fut champs.

strong with an anchor

a bit skinny but that means he is more agile

Im playing fut since fifa 12 i`ve used so many different cb`s and Marcel Desailly primer icon is the worst of them. Before I did the sbc I`ve used Joe Gomez Future star and Viril Van Dijk POTM on the cb position, to upgrade my center backs.I put him on to my time instead of Gomez. The first matches was aah ok when he did something wrong I was like" I have to understand this cards play style, now I have used him in two weekend leagues. Before I got him I had beginings of fut champs 10wins 2loss or 12-3(4) now with him at the cb positon I have problems to reach silver 1. Desailly is making a horrible mistakes that cost my team a goal every single match, he is giving my opponents penalties losing easy duels or getting humilaited by players like Martial 83 or Rashford 84.I will make a uptade on this post in like one month and I`will se if he has been better, if not I will put him on an primer sbc