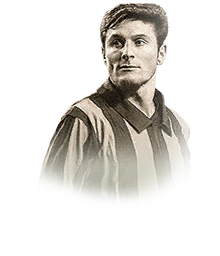 I decided to do the Prime Moments Zanetti SBC because I was lacking in a top class CDM. Stat wise he looked like an all around beast and was a lot cheaper than the other CDM options so I had high expectations for this card. Before I go into the pros of this card and why I am over the moon to have him in my starting XI, let's talk about what let's down this card. Looking at the card, the shooting stat is horrific and the in-game stats are no exception. He can probably bail you out on a random occasion but you cannot trust Zanetti to score crazy long shots consistently, however, I did not need him to. As a heavily defensive player, he rarely attacks up the pitch and is a lot better at setting up goals than finishing them. His strength is also not the greatest but the defensive stats bail him out on most occasions. Lastly, the biggest downfall on Zanetti all year is his jumping. He surprising wins about 50% of headers he is goes for but is not as consistent as I would like or as a tall aerially strong player. Now lets get into why Zanetti is a fantastic CDM. His passing is absolutely phenomenal. Both long and short passing are beautifully placed where they need to be as he is able to set up some beautiful goals. His weak foot also helps him out as he is able to do it on both feet. His previous cards have had high/high work rates yet his Prime Moments has changed to medium/high. This is a lot more useful and is perfect for a CDM. His defense positioning is phenomenal as well as he is always ready to intercept or tackle the ball and start a counter attack. He is very good at dribbling and can do some very good close control or change of direction moves. His pace is also very good as he is able to chase any player down while not getting tired as his stamina is great. Overall, I am very pleased with Zanetti and is definitely worth it in my opinion.

Passing: The biggest pro is his passing. Some of the best passing I have seen from any player this year. Perfect speed and weight on any pass and is perfect for quick counter attacks or a ball over the top

Work Rates: He stays back and rarely gets too far up the pitch in order to keep defensive shape

Defending: Phenomenal defensive positioning. He is eager to attack the opponent and tackle the ball and can intercept most passes near him. You can count on him to make many important tackles

Physicality: Can play a full 120 mins with ease while maintaining a high rate of play

Dribbling: Very good at close touch dribbling and overall ball control. Can be trusted to get you out of sticky situations when an opponent high presses you.

Pace: Pretty rapid for a CDM, does not feel as fast as 90+ pace players but can hold his own when chasing them down or just tackles them before they can accelerate

Jumping: Will win some headers but rarely enough for good consitency

Strength: Not as strong as I would have liked but still can body off the majority of players

Shooting: Do not shoot with Zanetti. Pass it to your better shooters

This man is a machine! He is literally Kante on steroids!!

I have had A LOT of packluck recently that gave me 1 million coins to spare. I was really looking for a monster of a CDM and really got lucky with this guy, because he was listed for around 80K cheaper than normal, and exactly my budget.

His defensive play is amazing, and he even scored a 25 meter screamer for me. His passing is also very good (without chemistry style!), he can give perfect through balls. The only minor downside is his height combined with his jumping. He wins 'only' half his headers.

My conclusion is that you really need to buy him if you have around 1 million coins.

His pros definitely are:

The only con I can think of is his jumping and sometimes his strenght.