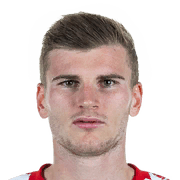 I started off the game from day 1 and quite not sure which striker to use for my Bundeslinga team. After much research finally decided to go with this man.

I also used him as a super sub. He 's really clinical near the goal post.

Pace. He's really quick. Use him in 70th min and a goal guaranteed.

Not much but work rate and Physique is little low as far as i think.

I am using him since 1 week after release.

He's quick and makes good runs behind the defence, but for me he wasn't that good infront of the goal for his Finishing stat.

He is a good player for the beginning, but as the Squads of the competition got better, his Performence startet to decline.

What suprised me was his passing that was a lot better than his stats on his card what resultet in many assist.

I also used him in the 4-2-3-1 where he played the solo Striker were he also performed pretty good.

But for his Price he is the way to go in a beginner Squad(Cheap Squad).

Good on the Ball

Strength(was not rly a big problem,bc of his good runs)

The best striker I have used this FIFA. I used a deadeye on him and compared to players like Jesus, Vardy and Lacazette who I have used, Werner is the big standout. His first time finesse shots are freaky they go in basically everytime and his pace is amazing. I had him on get in behind for his tactics and scores on an average of 1.5 goals a game and for his price tag is definitely worth it!!!

+ DRIBBILING (quick in change of direction)

-STRENGTH (Not much but in some situations)