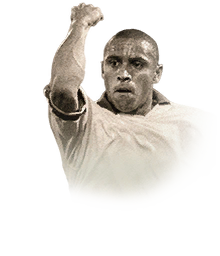 Finally the Prime Moment SBC has arrived and as a big fan of RC3 he was a must-have. In the following review I'll explain my thoughts on this card. I tried this card in WL and in Div 1 and I can tell you: He's a beast. His pace is great (runs against Mbappe ect. are no problems), his passing is on point (short and longpassing) as well as his crossing. And his shooting, oh hell, longshots are his speciality. He scored me some real bangers out of the box as well as some freekicks (99 FK accuracy, 99 Curve, 99 Shot power). It's kind of nostalgic to see Carlos run up for a freekick. But lets talk about his defensive skills. Sometimes I had the feeling that he's out of position, caused to his high/high workrates. Don't get me wrong, his interceptions and tacklings are great and due to his workrates he's everywhere, but in some counter attacks of my opponents he's not on his position and needs some time to run back. And maybe his biggest problem is his height. The meta is all about crosses and heading. Sadly Carlos is not the tallest player. With Anchor you get his jumping to 94, but against taller players he often loses the ball in the air. His dribbling is okay and smooth (he's obviously no Neymar). His 2* weak foot are no problem to me because on the left side he only need his left foot. He lasts the whole game due to his 97 stamina.

All in all I can say, that Roberto Carlos is fun to play and that nostalgic factor to shoot with him and score special freekicks with 99 curve is amazing. But if you compare him with other left backs there are some (cheaper) alternatives who fit the crossing meta better than him, e.g a Alex Sandro Headliner or TOTY Marcelo.