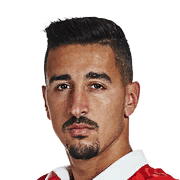 Hey Guys! I know that lots of you under value cards like Almeida not enough pace/to stiff etc. Personally I really like to try players myself. After brutal lose (2-3) in weekend league due to Lala's high workrate in offence. I'd decided to try some new left backs. My first thought - I'd like to have a left back with high defensive workrate - and there we have him portuguese anchor Andre Almeida. His main pros is versatility - his jumping stat and height makes him unbeatable in air collisions, he is really strong, that's not an issue for him to push off the ball elite level players like CR7,CR9 or even Gullit. I was really surprised how good defensively is this guy. After 5 games I'd decided to put CATALYST on him and 'balanced' instruction in terms of attacking. What a great decision it was because of high defensive work rate after losing possession he was always ready to make a run for oppositions' strikers/wingers and catch up with them pretty easily. In terms of attacking - his 99 crossing and my CR7/Ibrahimovic had been killing opponents. His only con is agility but he's not as sloppy as people think he is He really affected my team in a great way and I was blessed with him. Almeida had turned my dreams of getting elite 3 into reality. You have to try him and don't be mad if you get this guy in your guaranteed LIGA NOS TOTS this guy is mental.