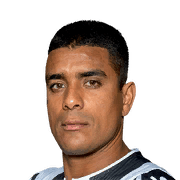 I'm pretty sure that I'll talk about the best brazilian RB so far. The best Brazilian RB that most of you even don't know. Here I present you Leo Matos: the RB from greek PAOK. This year you don't have many options for RB from Brazil. This guy even though he's non-rare is better than any Dani Alves or Mariano. Even though he's non-rare and worth around 1K he can play in the squads worth even 300K. He's one of the fastest Brazilian RB. However his PACE is "only" 83. You don't feel it. He can race with players like Sane or Douglas Costa. That may be caused by his decent HEIGHT. He's 184cm (6'0"). Not bad as a RB. What is he also good at? Well, because of his SHOOTING he can be also very useful as a RWB. He has 70 finishing as a RB. Actually I've played him once in a formation 5-2-1-2 and he scored 2 goals. But also as a defender he's a MASSACRATOR. His DEFENDING is much better than on a card. He used to have 69 interceptions. But not really. In this piece I cannot find any difference between him and for example Walker. He's playing like he's got ~83 DEF.

1. Buy this MASSACRATOR for 1K

2. Put him in the Bench OR make an INSANE connection with Khacheridi (check him out too)

Pace - in game much better than as written

Shooting - he's as clinical as Messi