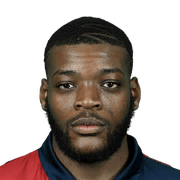 Used him in my full silver FUT Champs team. He played a central center mid in a 4-3-3 and was mainly used to start attacks from the very back. His pace was nice, on and off the ball, which leads me to his dribbling, which was also a positive surprise. I never really got into many serious shooting scenarios with this card, so I can't give an honest review in that field, but from what I experienced it was pretty average. His distribution was good, but most of these passes were to his other midfield partners (so mainly shorter passes). On the occasional instance where I needed to play a long ball he was reliable. This cards defending is actually very good. This came as sort of a surprise to me as while 69 is a good defending stat for a silver, it is still nothing incredible, but it felt much higher than the card suggested. What didn't feel higher than suggested was his strength, which is probably my biggest disappointment with this card. He was frequently bossed and bullied and didn't reflect his 84 strength. My other concern with this card is his aerial ability. 5'11 isn't short, but his 55 jumping does not help his case much in the air. I do like his 81 stamina which pairs nicely with his high / high workrates, which I will view as a positive due to the box-to-box role he plays in my team. Overall, I believe Ntcham has a very good card, but I'm not sure if he is worth 10k (my buying price). There are other alternatives that are not silver that will get the same job done as this card for a fraction of the price (coins are tight around my club). Still, if you are building a silver team, which I assume is the reason you're reading this review he is a must have (see strong link to Ajer, who is one of my favorite center backs this FIFA. I'll try to review him in the near future). In conclusion, Ntcham is essential for your silver squad, but I don't think he will work in a upper-class team. If I'm rating him as a silver, 10/10. If I'm rating him like any other FIFA card, 7/10.

-Shooting is slightly below expected