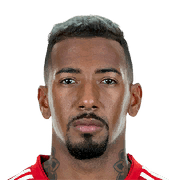 I did not like Boateng for the last 3 years, but this card for me has been fantastic.

Height + Physical - 6foot4 with 91 strength and 75 jumping!? Madness for normal defending, and it helps protect you from some BS corners. (You will still concede some.)

Defending - Tackling and interceptions this guy is a monster. Stand or slide its all good, he can reach for the ball where you don't expect it.

Pace - Decent pace. More than enough for the time being.

Agility + Balance - for loose balls in the box he is a pain. Yes he has good reactions and decent composure, but if you need to turn him around then you have likely conceded. Can be slow in this sense.

Scoring - Normally my CB's get a couple goals during the WL, however Boateng didn't. I'm sure he will in future but he isn't that much of a factor offensively from corners (surprising tbh.)

Value - expensive for a CB, not horribly but for a casual could be difficult to afford.

Boateng is my most used player of all time with 340 games and the reason is of course that he is an amazing defender and no one gets past him. Boateng is strong, amazing at defending (especially standing tackles) and he performs well overall. But he is bad at shooting and penalties. But you will luckily not use him as a penalty taker except for a ridiculous penalty shootout.

No attacker (or midfielder) gets past him.

He is bad at shooting. I try shooting with him after corners. It ends up in the crowd.

This guy got from hero to zero in one year. From my experience in 25 games with him i will point out some key facts why he is not that good this year and feels like an average defender.

He feels lost when you get countered. His balance is terrible and despite his strength which feels less than 91 he's getting pushed off the ball. Generally you will not feel safe with him at your back line. There are better defenders out there with less rating than him that stand up to their defensive duties way better. I expected him to be close with Varane, Umtiti, Ramos, Van Dijk or D.Sanchez but he is not.

Not as effective as last year