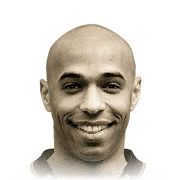 This year the fifa gods rewarded me for many years of almost religous devotion to fut. For the first time ever my luck had turned and I finally got the start of my dreams!

This card, though it is not the prime version, feels very much like a prime icon. He can do it all on the pitch and suits the new game play very well, with his big figure, good pace, and excellent crossing.

I used him as a left wing on the new 4-2-4 formation and from that wide position he manages to do so much. Since there aren't many good right backs, in the game right now, he is a safe bet from the goal kick. He always wins the ball, and very often, you get the chance to head it to your midfielder who sends a through ball past the defender and back to Henry. From there, you can cross it into the box, or go for goal with him. He is always dangerous from the distance, but with his 90 pace and 87 dribbling he is the nightmare of every defender as well. He is so quick on his feet, and doesn't need much time or space to send a powerful ball at the goal. Should you get into a good position to send in a cross, he is also magnificent. He will send them in with surgical precision and if you have tall attacker you will bully opponents with headed efforts on goal.

Pace - He is fast, so good when beating the defenders to the through ball

Dribbling - His dribbling is great, very quick and agile, and you can send fast balls at him as his 89 ball control, will get everything under control very quickly

Shooting - 93 positioning and 91 finishing really speaks for itself. He gets into some very dangerous positoins and finds the back of the net so, so often.

Physicality - When using hawk on him, he has 77 jumping, 83 stamina, 85 strength, and 76 aggression pair that up with him being 188cm tall and you can imagine how good he is. He wins every header, he is not easily pushed off the ball and he manages 90 minutes easily. Such a Beast!

Passing - His passing is very good. Whether it's on the ground or in the air, you can always count on Henry to deliver the ball safely to the other players on the pitch

Icon - He links with everyone and helps out with hybrid as he strong links into all the french players of which there are so many in fifa 19! Besides that, there is just something about icons. They just feel better than "normal" players, like winning the ball more often and managing shots other players wouldn't be able to pull off.

Price - He is very expensive, I would never have got him if not for my insane pack luck. However - should you have around 1 mil laying around, he is definetely worth it.

"Coach why I have to play in the center?"

"Because you're BORN TO BE A STRIKER!"

So, I write this review on late July for a player that after TOTS and Futties is maybe a little bit underpowered, but if you're a casual player like me and you like use Icons and expecially you're a fan of Henry you cannot miss this gem.

I want from the formation in which Henry was in, I like to make past and present teams and Arsenal was one of them. Starting from the left median in a wide 4 2 3 1 formation and switch him into lone striker position in a narrow 4 2 3 1. Behind him in central CAM position Dennis Bergkamp to form one fo the most incredible partnership I saw in FUT so far.

As a striker I was impressed about the ability of Henry to cut down from a wide position stopping high passages from behind: he makes perfect runs, absolutely perfect. After controlling the ball with grace (his ball control feels higher than 89) he's able to overrun every single defender in game (with Hunter style). It seems to be again if FIFA 15 when the only thing you need was a pacey striker and the job is done. But Henry is much much more. Is a perfect mix of strenght, grace, pace and finesse. EA just do a good job to resemble the real Henry sensation when you play with him, you got the sensation to have a player that can take the ball in the middle of the pitch and score a goal that no one else can score.

I'm a bad player, but he's the only striker on my whole FIFA 19 experience that got more goals than games.

So go on the market, by him and put the Arsenal kit (if you are a neutral supporter like me). Then switch the English commentary and listen at Martin Tyler that in every sigle game will shouts "THIERRYYYYY HENRYYYY! what a goal! is a normal day of work for TH... hat trick for him!"

Pace: he feels rapid, unstoppable even in the first paces. Very rare for a such tall player (99 with Hunter chem)

Shooting: flawless. It seems that the normal shots you perform are turned in finesse shots and most of them are in the back of the net. Long shots feel far higher than 84

Passing: more than enough for a CAM, image it on a striker.

Dribbling: it feels higher than the stats suggest, 4 stars skills are a bonus

Physical: if you put a stay forwrd and low interception he will last the whole game

Fun factor: commentary, in-game models and the sensation to have an ICON in your club are very good.

Heading: not the best, he scores some of them but is not his main weapon

Position: yu have to be able to switch him in a striker position to unleash his full potential, as winger he plays good. A striker he's phenomenal

i have played 32 games with 25 goals in champs in division 1. He is absolutely unbelievable. I received this guy in the mid icon sbc and thought another useless lw to sit on the bench in my team. I was wrong.I played him as a striker in a 41212(2) and 4231 and every time he got the all i felt i could glide passed opponents. I abuse the iniesta skill move with this guy and is shown with his 94 ball control(with chem style) so the ball seems to glue to his feet.

His heading is unbelievable for a guy a thought was going to be like James in the air.He doesnt really jump but stands their with his massive head and nods it in every time.It makes it easier that he is 6'2 so this is another pro

His crossing is fine because i abuse all those lb x crosses to the back stick so this is a must have for him.

I could only wish his stamina was 99 but it isnt