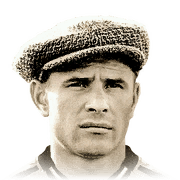 first sorry for my bad english i come from germany

I made the icon sbc for a untradeable goalkeeper because i sell every goalkeeper after a bad match but that is over!

LEV YASHIN IS THIS YEAR THE BEST GOALKEEPER!

I played this year with every keeper for example Courtois, De Gea, Neto IF, ter Stegen and Ederson and nobody is better than Lev Yashin

I play Yashin with GK Basic

his handling is so good

he is super fast

when you have the right side in a penalty he save it!

he can shoot penaltys very good

he has a cool hat

he is always on right position!

with GK Basic NONE

Keepers are a mess this FIFA. Some games you may just as well build a wall in the goals and it will make no difference they play that good. Others they will just crack under pressure and concede stupid goals. Well Yashin isn’t any of those. Keeps his cool and just saves everything. "The trick is to smoke a cigarette to calm your nerves and then take a big swig of strong liquor to tone your muscles." was a quote said by Yashin. On a basic, he maxes out diving, reflex and position which is amazing. His handling his brilliant as well. He’s also good at dealing with crosses, always makes the right choices. On the other hand of the pitch, with 108 games he has a return of 23 goals and 10 assists,all in FUT Champs or division rivals. Most of them are from Penalties or last minute corners. I’m not joking he’s brilliant in those. Unlike most keepers who don’t even move or react in a corner, Yashin is active in the box and with a little distraction from his market he will punish him. Another amazing thing about this card is the “Team Player” trait. Good at quick one-twos, Always passes it to the team, really the only time he doesn’t pass is when I make him go on a run when smashing my opponent. Always gets at least past halfway, a few times even forcing corners. Overall this guy is amazing, and so is his hat.

I am a division 2 player nearly at Division 1 and this man is absolutely fantastic, I play him with a GK basic which is in my opinion the best card for the Icon Yashin. I have used most of the top rated goalkeepers in this game including De Gea, Cortouis, Oblak, Neuer and nobody comes close to this absolute monster. I normally play around 10 games with a goalkeeper to check if he is the man for the job, i did the same with Yashin in Division 2 as I wanted to check the consistency of Yashin and he is captain consistent.

I bought Yashin for 730k and overall I would definitely get this card because 700k (price he is at the time of writing this review) for this card is an absolute steal, you are getting the best goalkeeper in the game who is also an icon so links with everyone. I would never normally pay above 1 million for a goalkeeper but Yashin will be in your team for the rest of the game so for him I 100% would.

2.Always in the correct position.

4. Good speed for a goalkeeper.

5. Kicking is exceptional (provided me with 2 assists in 10 games).

6. Brilliant Handling ( He makes sure the ball is not near the oppositions player when punching it away ).

8. Stops those Finesse stops that we all hate.

1. There isn't really a con for this card so lets just say hes Russian so doesn't green link to anyone you would use in the defense.