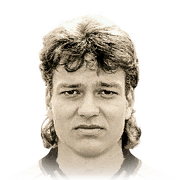 I completed the mid-icon sbc for around 100k due to having a lot of players in my club I wanted to get rid of. Obviously I was hoping for one of the big icons but all I wanted to do was avoid goalkeepers and defenders, so I suppose getting Litmanen wasn't too bad but at first it was disappointing.

It really shouldn't have been though because he has turned out to be an amazing addition to my team - centre CAM in 4-2-3-1.

Just for reference I am in D1 (like everyone is now thanks to the update) and I stop at gold 3 in champs with a record of usually around 14-6.

Pace - I used him in the engine chemistry style and he felt really quick which surprised me. He often was able to run in-behind defenders on the counter attack which even some of the quickest players in the game seem to be unable to do.

Passing - his on card stats suggest his passing isn't particularly special but I found him to be a great passer providing many assists.

Shooting - for someone with 82 shot power and a chemistry style which does not boost shooting, the power he gets behind the ball is ridiculous, sometimes a little too much as he has a tenancy to shoot over the bar occasionally. In general I found his shooting to be great, finishing, long shots, volleys all fantastic in general and always composed in front of goal as well.

Positioning - probably one of the best features of the card is his ability to always be in the right place, which is a problem I have with the central CAM in the formation 4231 but the problem has been solved with Litmanen.

Stamina - in the central CAM position, with the play style I use, which is pressing the ball with the CAMs, it is important that they have good stamina and 90 is more than sufficient to play 90+ minutes.

Physical Presence - for me this is not an issue as he is in a team full of strong powerful players, however, he has low strength and very low aggression so will be dispossessed if you engage with large CBs/CDMs.