So, i decided to do the base icon SBC. I spend around 200k coins to craft the SBC. I'm hoping to get a striker icon (Butragueno, Stoichkov, or R9 Haha), because i need a striker for my team. It turns out, i got Bobby Moore base icon. At first, i'm not happy, it's not because i got Moore, but it's because i didn't get a striker icon. At the moment, my CBs are POTM Van Dijk and NIF Davinson Sanchez. NIF Sanchez is just doing okay for me, so i don't get the urgency to change him. But because i got Moore, i sell Sanchez and replace him with Moore. I'm not expecting anything from Moore, because he lacks of pace. To be honest, in FIFA 19, i still need a pacey players, especially defenders. When i played Rivals with him, it felt surreal. He's so good, i don't know why. Well, he's not fast, but his positioning is so good. He always be in the right place, and he rarely come forward to help the attacker. He's the kind of player that prefer to stay at the back, not like my POTM Van Dijk, sometimes he's trying to help my attackers.

Let me breakdown my review about Bobby Moore Base Icon:

Pace [70]: He's not fast, so i put a shadow on him to boost his pace. Because of his pace, i rather to instruct him to stay at the back while attacking. For me, this is not a big problem.

Shooting [60]: He's a defender, so this stats are irrelevant and not that important. Once i try to shot with him from outside the box, and it's awful hahaha, but it's okay because he's Bobby Moore, not R9.

Passing [78]: His passing is very good. The short pass is on point, rarely missed, (almost) always get to the recipient. Sometimes i used the drive pass (R1 + X) with him, and it's okay, same as the short passing. I rarely used long pass with him, because of my playstyle (tiki-taka possesion football). I only used long pass with him to change from the right side to the left side (vice versa) when i'm being pressed by the opponent. Overall, his passing is top notch.

Dribbling [73]: Although the base stats of his dribbling is only 73, but when you look at his in-game stats, it's actually very good. With his 80 agility, Moore turns so fluidly. His reactions and composure are 90 and 91, it makes him so reliable at the back even when he's being pressed.

Defending [90]: Defending is Moore's best stats. He's one of the best defender in the football history, and it's quite fair to see his defending stats. With shadow chem, his defending will be boost to 97, and it's amazing. Besides the heading stats, almost all of his defending stats will be 99 rated (standing tackle is 95), and that's what makes him so reliable at the back. I often press square (to perform standing tackle) with him, in 8 out of 10 attempts, Moore will get the ball. Sometimes i feel when you have a defender with a good defending stats, the tackle is more reliable and less to concede a foul. Not to mention his interceptions, he always in the right place at the right time.

Physicality [83]: His stamina is very good (92), he will last until penalty kick i can assure you. The strength is okay, he's not the kind of strong player (like Van Dijk) but with his defending stats, he'll do the job done to stop the attackers. His jumping is okay (82), but he's often lose the header because of his height (only 5'10"). I think besides the pace, the height is his cons.

I recommend if you want to try Moore, you should have a bigger defensive partner for him. Like me, i have POTM Van Dijk, so when it comes to corner, i still can defend it without any concerns.

Defending (all type of defending except air duel)

Shooting (Of course his shooting will be bad) 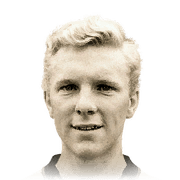 I've used Bobby Moore for a couple of days now, and he's actually quite decent. I paired him alongside both Sergio Ramos and Dayot Upamecano(both packed and untradeable) in the weekend league and division rivals. He was good with Sergio Ramos, but with FFS Upamecano, he really shined. Height:Obviously a major con is his height, which isn't even that bad due to his jumping. In most games he does win mos...
Read full review
0
/600
Update my avatar Dos and don'ts
Top Rated
New
Controversial
Show comments