I saw this Martial card and I thought: this is a bargain. An 86 LM IF with amazing stats and a good league. But I was wrong. I didn't really like this card. On paper this card looks amazing but in game he didn't perform like his stats say. The only positives I have about this card is that he's quick but in this years Fifa pace doesn't really matter anymore. His shooting is OK but 9/10 shots that he's alone in front of goal he misses. ( All shots were perfectly time as well ) It's also not ideal that he only has 3 star weak foot. His dribbling stats look amazing on his card but it doesn't feel good when he dribbles. When you dribble he sometimes shoots the ball too far ahead of him so he loses it. His passes are okay from short range but through balls and passes over a long distance are not good. It's also really annoying that he only has 78 stamina. Because he's a midfielder he'll be tired after like 65-70 minutes and you have to sub him off. That's not what you want from a card that costs 65.000 coins. His strength is okay but he doesn't really get to use in when he's on the ball because he loses it pretty fast.

( I used martial in a 4-3-2-1 at LF in division rivals division 3. I played 30 games with him to test him really well and he got 4 goals and 2 assist. That's also because I needed to sub him off at 70 minutes because he was tired )

I would recommend trying 86 LM OTW Richarlison instead of this card. He's cheaper and he's better in my opinion.

This review is my opinion of course so it doesn't mean that he doesn't work for you.

• His strength is okay

• His passing is okay 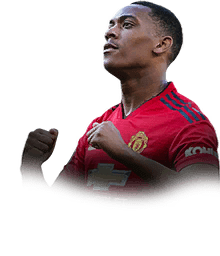 I got him for 84k in a french/ligue 1 hybrid, and pared him with TIF Pepe (who is also amazing), and he did not disappoint. He was able to score goals for fun. I kept him on shadow as I was too tempted for the 99 pace as well as the shooting boost. He was a true savior, scoring 5 goals in one match. I would also like to add that his finesse shots are amazing and legendary. He was also in a 4-1-2-1-2 (2) formation, in which ...
Read full review
0
/600
Update my avatar Dos and don'ts
Top Rated
New
Controversial
Show comments