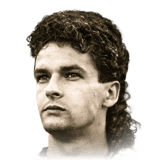 I'll get to the point: this guy is a top tier meta CAM. Played him in a 4-3-1-2 and the guy shined even in that garbage formation.

DRIBBLING: the guy has the sticky, 5 star skills is a treat and the guy can dribble with the best of them. Tip: don't try to pace past defenders, using dribbling then burst.

SHOOTING: Great long shots with the sniper chem, absolutely clinical inside the box and will finish most chances with both feat, fantastic finesse

PASSING: Arguably his best trait, this guy is the best passer I have used all year and I have Pirlo in my team...links up play extremely well in the final third and provides assists all day

DEFENDING: irrelevant, I wouldn't play him as a CDM

PHYSICALITY: The only problem with this card is the stamina, very poor and gets tired after 70 minutes...won't often get pushed off the ball, he feels pretty strong

Go get this guy

Reliable finishing (both long shots and in the box)

At first glance this card looks decent, but once yom you realise that he's a god. His finesse shots are unstoppable, he barely hits the post, and usually the goalkeeper can't catch it. HIs shot power is real low, and you notice it when you go for near post shots, but his finesse shots can save you. I have a hunter on him and with it he feels really quick, and his shot power does get boosted a little and it's alright. His agility and balance is decent, but his 5* skills is real nice, but he doesn't feel as good as for example James who has 99 agility and 95 balance but is still really good on the ball. However he has a really big down, which is his stamina, he's dead by 60-70 min if he starts as a middle cam, if he's outside he can stay on for a little longer, if he doesn't always sprint down the wing. He also rarely misplaces a pass, and his through balls usually go through. His heading accuracy is real bad.