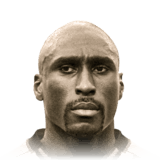 50 SB Games and I finally got him. Prime Campbell. His stats look promising, a similar kind of player to Van Dijk, I hoped, to complete a fearsome defensive partnership.

He exceeded all expectations. To give some context, I usually finish with ~17 wins, meaning I win (on average) about half my games. So far in this first WL with Campbell?

6/7 so far. The man is a beast. First and foremost, his combination of uniquely huge body type, supreme strength and high tackling stats make him one of the best tacklers I’ve played with this FIFA. Not only does he fare better that most when manually tackling in terms of winning the ball, but his ability (only matched by VVD) to truck through just about any ball carrier means he comes away cleanly in possession 9/10 times.

His interceptions are remarkable too, as with his heavy body type and low agility and balance, you would expect him to be an immovable, albeit good, object. He’s not. He has an insane reach allowing him to latch on to balls far from his feet, which is useful if you like to play a high line.

His passing, likely the biggest turn-off for this card, feels more like 80 than its lowly 60. He’s no Iniesta but he can play the ball out the back with confidence and accuracy, which is all you really need.

His aerial ability is solid. He is yet to score a header for me yet, but even VVD has only bagged ~5 for me in 380 games. Heading is broken in FIFA20, especially on corners, which are the only time Campbell is high enough up the pitch to head toward goal, so I wouldn’t worry too much here. Defensively, both in his own box and with balls over the top, he is perfectly capable of beating his man to the high ball 9 out of 10 times.

His pace is relatively high for a defender, and with a Shadow Chem Style he gets 92 acceleration and 93 sprint speed, meaning he can contend with most attackers. Again, you won’t see him barrelling down the pitch in chase of a long clearance, but with the right chemistry he is rapid even with his big build.

Overall, if you have the facilities to do so, I would 100% recommend getting him from Icon Swaps, and now that I know how he feels in game I wouldn’t hesitate to spend 800k on him either.

-Rapid (with the right chem style)

-Passing is better than expected but could be better

Before I begin, this is my very first review so if I leave anything out or if you have any suggestions on how I can improve, feel free to ask or leave suggestions!

I bought Sol Campbell because I needed an English Strong link to the new Pope SBC card who I wanted to try out in my team. I've tried prime Rio in the past and didn't like him and Tomori's price was drastically inflated so I patiently waited and got Sol on bid at a steal of a price. It's been a very good decision. Most of this review will be based on the rivals and fut champs games ive played with him so far. I put a shadow on him because I figured his physical stats were more than good enough to bother with an anchor.

Before I get into what makes Sol such a good defender, let me explain a bit how I use him. I have him partnered up with SS Alaba (who is probably my favourite CB I've used this year- I'll do a review on him if anyone is interested). I always have success with a big tanky CB and a smaller more mobile CB paired together- previously Alaba was paired with SS Zakaria, who Sol has replaced in the team. I play 4231 in game on 1 depth, balanced defence (sorry, I give up too many through-ball goals if I don't use 1 depth, that's my biggest weakness defending). Otherwise, I'm a very attacking player and I like to hold possession.

But let me get into Sol himself:

-To start with, he has a massive body type and just like all CBs that size, he sticks his big long legs out and intercepts everything/makes tackles you wouldn't expect to get because the opponent is so far away. If you've used or played against SS Zakaria, Flashback Boateng, and VVD for example, you know what I mean.

-He is FAST: he is much quicker than I expected. Obviously he won't be keeping pace with the fastest players in the game but he covers ground so quickly and his immense size makes it so difficult to get past him anyway, he is more than fast enough. He feels much quicker than the man he replaced, SS Zakaria.

-He is very mobile: You might look at the in games and get put off by his agility and balance. DON'T BE!!!! I can't stress this enough, he feels more agile than most of the CBs I've used this year. He doesn't feel clunky at all, he actually feels very light on his feet. He can turn and move laterally very quickly for a man of his size.

-He is a bully. I kid you not, I shoulder barged Jamie Vardy POTM in a fut champs game and Sol launched him about 10-15 feet back the way he came. Obviously, Vardy isn't a strong player but he's aggressive so he can be hard to push off the ball. It doesn't stop there though, I don't think I've lost a physical battle to anyone with Campbell. He beats everyone (including CR7) in the air and pushes off anyone who comes near him without fouling. It really is great. He's only picked up 2 yellow cards in 111 games and neither of them have been with my club in the 50 or so games I've used him.

-He wins the ball when he makes a tackle. As I'm sure a lot of you reading this review have noticed, some CBs win the ball when they make a tackle. Others make a tackle but when they knock the ball loose it just goes past them, the opponent gets it back, and they're in on goal while you're still stuck in a tackling animation. This was my problem with prime Rio. Sol has no such issues. When he makes a tackle, the ball is yours. You can count on that.

-His passing isn't awful but he isn't going to just start spraying passes everywhere. You can depend on him to make the short passes you need to make to get the ball to someone who can actually move it up the field, even when he's under pressure. Pairing him with a CB who is good at passing would definitely be a good idea.

-Don't try to dribble the ball with him. Sometimes I like to take the ball up a bit with my CBs if there's space in front of them and I see an opportunity to launch an attack by doing so. Sol is definitely not someone to do this with.

-All in all, I'd give him a 9/10 rating overall. He has some minor weaknesses but in general is a very good defender.

-Wins the ball when he attempts a tackle

-Passing, as long as you don't try to do too much

-Dribbling with the ball at his feet